New York’s annual Veterans Day Parade was held on Fifth Ave in Manhattan, on Sunday. This year’s theme marked the 100th anniversary of the end of World War I. Over 25,000 from around 300 groups participated in the 4-hour long parade, which was watched by half a million people.

The Falun Gong group, which has been invited to perform in the parade for 15 years, was the largest entry and one of the highlights of the event. 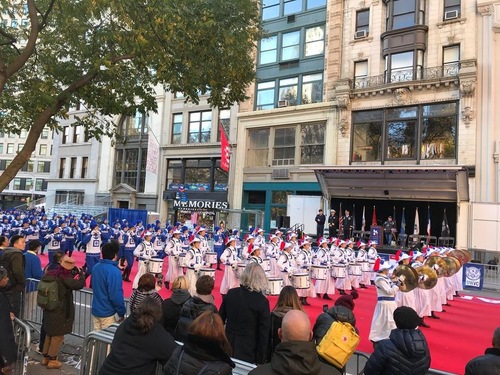 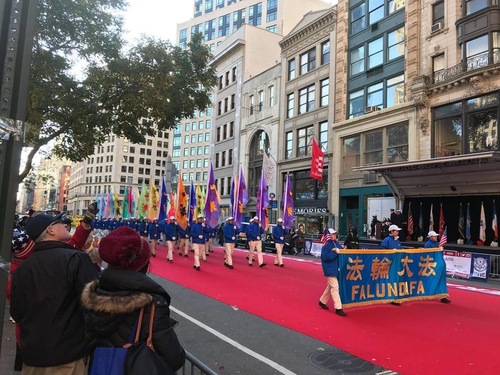 The Falun Gong entry consisted of the Tian Guo Marching Band, a banner team, a lotus float, an exercise demonstration team, and a waist drum team. 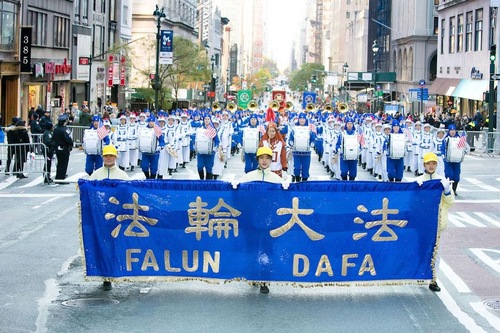 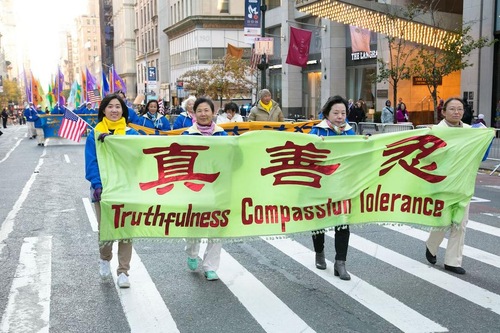 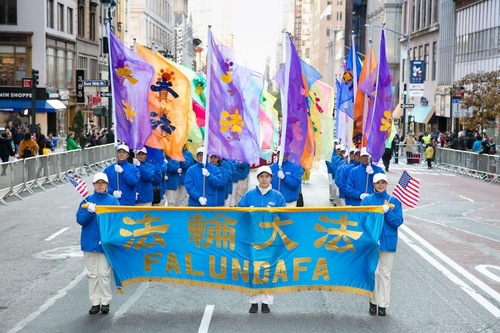 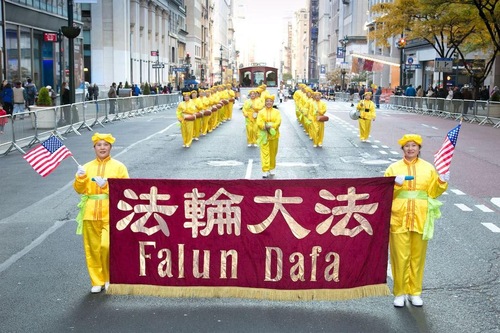 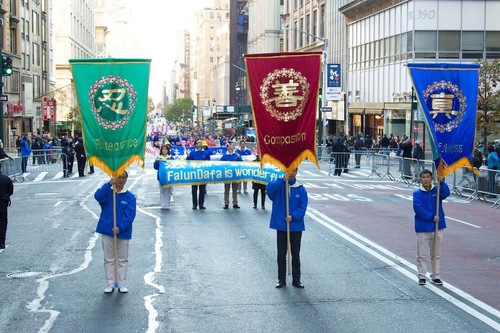 Yi Rong, spokeswoman for the Falun Dafa Association in New York, said that the U.S. plays the leading role in the free world. Because practitioners have been seeking freedom of belief for the last two decades, Falun Gong and the veterans are aligned.

The conductor of the Tian Guo Marching Band, Wen-wen Chou, was pleased to celebrate Veterans Day and bring the message of “Truthfulness-Compassion-Forbearance” to New Yorkers.

Ms. Chou said, “Besides the songs composed by practitioners, such as Triumphant Return and A Sacred Song, we also performed The Stars and Stripes Forever. We wish to salute our veterans who battled for freedom. We also wish the United States to remain strong and safe.” 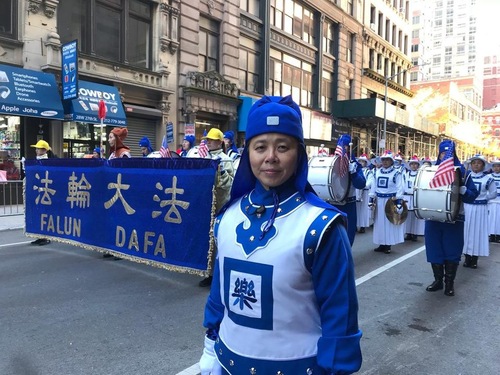 Zhou Wenwen, the conductor of the Tian Guo Marching Band

When a practitioner gave handmade lotus flowers and Falun Gong flyers to three police officers on duty, one said that he has seen every Falun Gong event in Manhattan in the last two years, and he is looking forward to the next one.

He said, “I know that the Chinese government is persecuting you, and imprisoning you. You don’t have to have fear here in America. We are protecting you.” 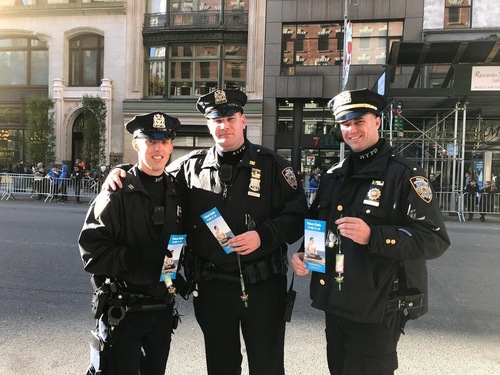 NYPD: We are protecting you. 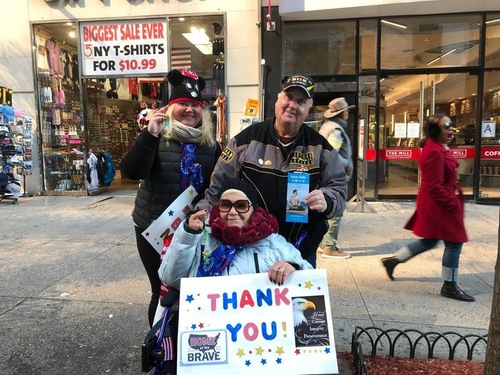 Sixty-nine-year old Ron, a Vietnam War veteran was injured three times. He pointed to the words, “Truthfulness-Compassion-Forbearance” on the Falun Gong flyer and said, “This is good for human beings.” 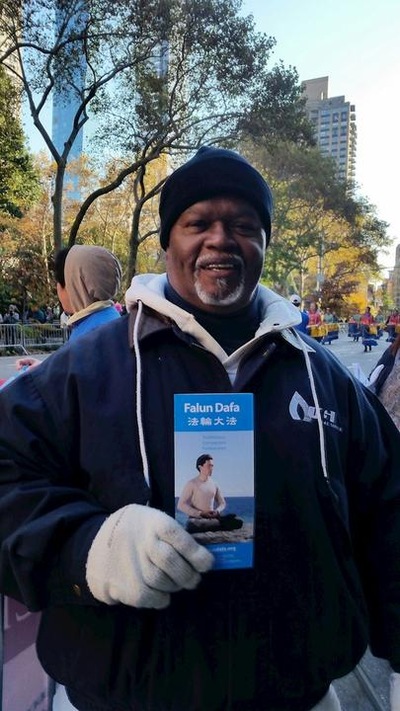 Horton admired the Tian Guo Marching Band’s music as well as their colorful costumes. “Their music is beautiful and touching,” he said. 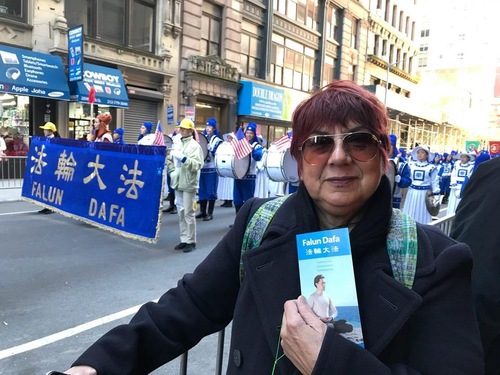 Carmen took a video of the Tian Guo Marching Band’s performances. She wants to learn more about Falun Gong and learn the exercises. 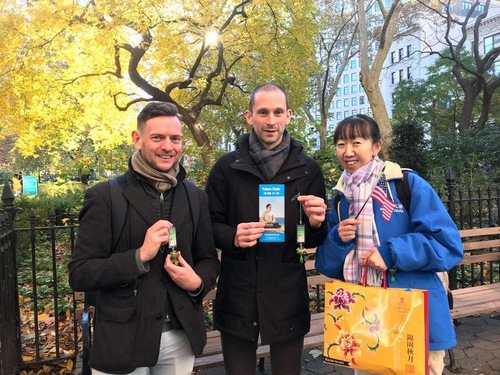 Two gentlemen from Ireland accepted flyers and paper lotus flowers. They said they would like to learn more about Falun Gong. 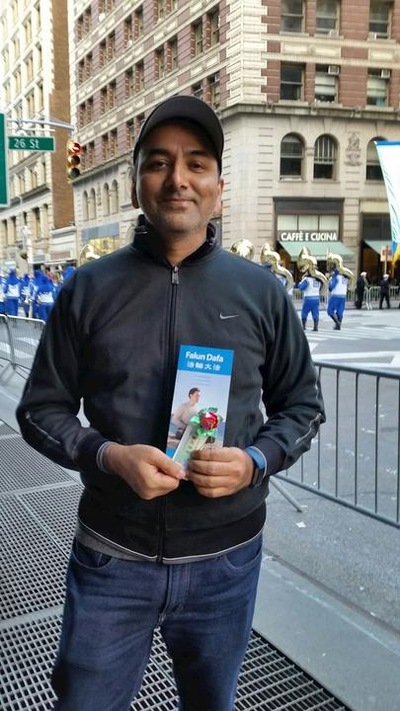 Abi from Singapore had heard about Falun Gong and said he was happy to see practitioners participating in the parade. “I admire their spirit,” he said. “I will learn more about them online.” 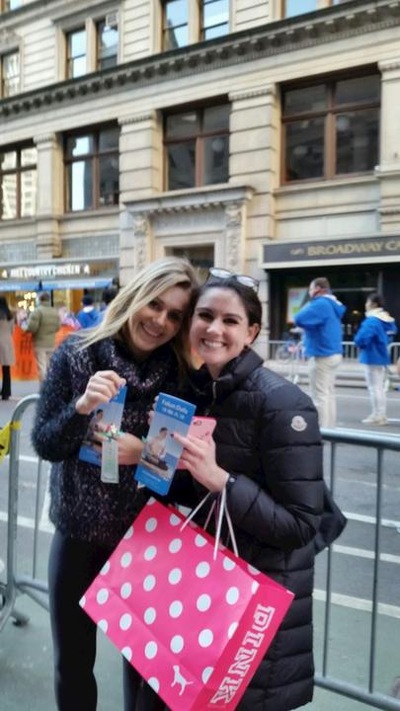 Smaranda and Courtney were attracted to the music played by the Tian Guo Marching Band. They took many video clips, and said they will share them with friends. 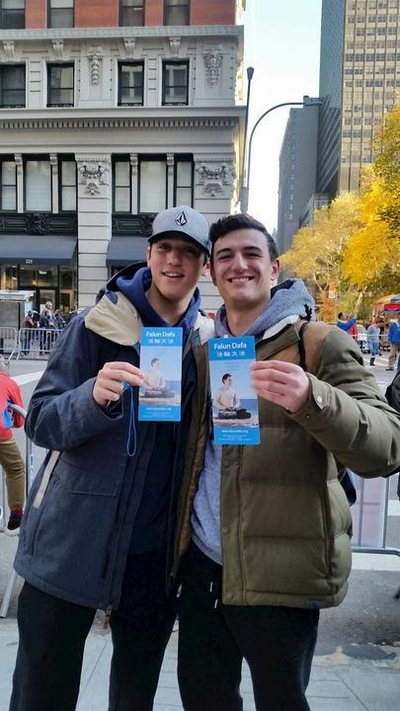