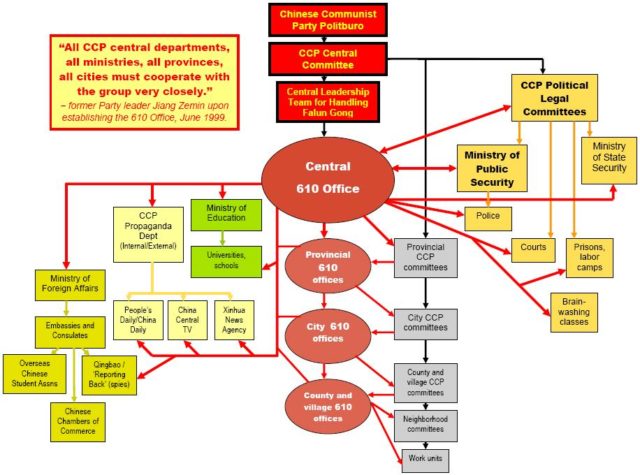 Diagram of the 6-10 Office structure, from the Communist Party's seat of power -- the Politburo -- down to neighborhood committees and village offices.

The 6-10 Office—named after the date of its creation on June 10, 1999—is an extralegal police task force responsible for carrying out the mission of eliminating Falun Gong.

Established by former Communist Party leader Jiang Zemin and announced in a speech to elite cadres a month before Falun Gong was banned, the organization exists outside China’s legal framework.

Jiang granted it wide-ranging powers to use “every means necessary” to wipe out Falun Gong. Operating in an atmosphere of impunity even after Jiang was replaced by Hu Jintao, the 6-10 Office has become notorious for its regular use of extreme torture.

In his book A China More Just (Broad Press), human rights lawyer Gao Zhisheng describes being shocked by the extent of the 6-10’s operations.

“The immoral act that has shaken my soul most is the 6-10 Office and policeman’s regular practice of assaulting women’s genitals,” Gao wrote after his 2005 investigation. “Of those persecuted, almost every woman’s genitals and breasts and every man’s private parts have been sexually assaulted in a most vulgar fashion.”

In addition to torture and sexual abuse, 6-10 Office agents also administratively sentence the Falun Gong to labor camps and abduct adherents straight from their homes to brainwashing classes. As noted in a recent article on the 6-10 Office in the Jamestown Foundation’s China Brief, “transformation” and coercive thought reform are a central aspect of the agency’s activities (article).

Though Party officials have externally denied the 6-10 Office’s existence, a broad range of public statements, internal documents, and testimonies refute such claims. Instead, available evidence paints a disturbing picture of a shadowy yet powerful Communist Party security force that operates like the mafia; an excessively violent organization that permeates Chinese society, but is well-known only to those who control it or work for it as well as, of course, those who dread it.