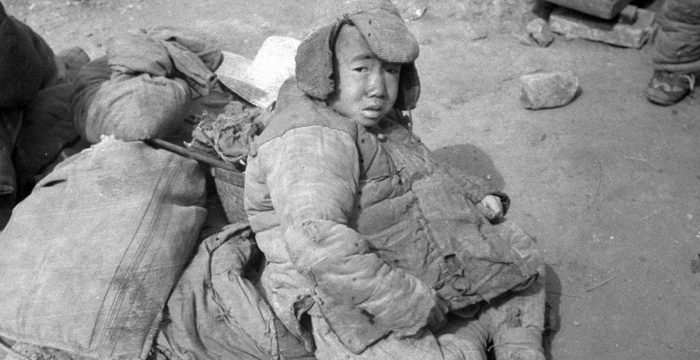 For thousands of years, the Chinese people called their homeland the "Middle Kingdom." That is, a land in the middle between "Heaven and Earth" where the very best of human culture blossomed.

This was no idle boast.

Throughout the centuries, China frequently lead the world culturally, economically, and scientifically. As recently as the 18th century, China was a prosperous state, with a robust economy, extensive natural resources, and a prestigious reputation abroad.

Beginning in the early 19th century, however, China began suffering a series of defeats first at the hands of European powers, and then the Japanese. Making matters worse, a series of natural (drought and famine) as well as man-made disasters weakened China and brought more suffering to the Chinese people.

As China’s condition worsened, schools of thought on how to address these problems emerged and contended. Particularly in the early 1900s after the Qing Dynasty fell, an era of competing republican views battled to set the course for the new China.

An invasion by Japan in 1937, followed by World War II further ravaged the already battered country. After Japan’s defeat, a civil war broke out between republican-leaning Nationalists and the Chinese Communist Party, that raged until 1949.

Although exhausted and depleted from more than 100 years of invasions, disasters, and turmoil, the darkest days for the Chinese people, tragically, lay ahead.

In a relentless series of terror-filled campaigns unleashed over the next several decades, the Chinese Communist Party brought a new and unprecedented level of suffering upon the Chinese people. Aimed at destroying all traditional Chinese culture and indoctrinating communist ideology into the minds of the people, these campaigns resulted in the deaths of between 60 million and 80 million people.

Here’s a sampling of those campaigns…

Under the guise of “land reform” and suppressing “reactionaries,” within two short years Chinese authorities killed 2.4 million people, according to the CCP’s own fi gures. Some put the fi gure at 5 million. With its violence the CCP achieved three goals: 1) the total elimination of village leaders, who were replaced with CCP authorities; 2) obtaining, from those killed, massive personal wealth; and 3) instilling deep, lasting fear of the CCP.

Between 2.4 million and 5 million killed.

Using the pretext of “fi nancial reform,” the CCP regime targeted capitalists and business owners across China in a show of force and terror. Victims were often forced to pay ar- bitrary “taxes” that well exceeded total holdings. Tens of thousands were killed outright, with thousands more being driven to suicide by the trauma of arrests, social ostracism, brainwashing, and punishment.

In a terribly ill-conceived plan to double China’s steel production, the CCP essentially turned the nation into one large labor camp. The fanatical drive required all Chinese to take part in steel-making. Farmers, forced to participate, abandoned their crops to rot in the fields. Local officials meanwhile falsely reported large crop yields, further feeding the zeal. The result: over 30 million starved to death, and the country was plunged into economic depression. In the aftermath CCP propagandists rationalized the calamity as a “natural disaster.” No disasters, however, were recorded at the time.

Between 30 million and 40 million people died.

The Great Proletarian Cultural Revolution aimed for nothing less than destruction of all traditional Chinese culture and values. The campaign reached such a frenzy that children would beat or even kill parents, teachers, and elders; many turned them in to authori- ties for torture or public humiliation. Killing became among CCP factions a way to prove one’s “revolutionary” status. So chaotic were the times that rampant cannibalism broke out in multiple regions. “The outside world obtained a glimpse of the violence,” accord- ing to China scholar Kenneth Lieberthal, only “when trussed-up corpses, many without heads, began fl oating down the Pear River into Hong Kong.”

Between 7 million and 8 million people died.

The CCP leadership brought a violent end to months of student-led sit-ins and hunger strikes on Beijing’s Tiananmen Square by ordering armed military to take the Square by force. The unarmed students were gunned down or crushed under tanks in a horrifi c bloodbath. To this day the CCP has not apologized or admitted any wrongdoing in the tragedy.

Thousands died. Most were students.

In July 1999 then-CCP-Chairman Jiang Zemin, resentful of Falun Gong’s popularity, ordered the peaceful group “eradicated.” The ensuing campaign—violent and brutal—has been seen by many, like CCN Senior Analyst Willy Lam, as “a throw-back to the Cultural Revolution.” Hundreds of thousands of cases of torture and abuse in custody have been documented, while millions have been detained, with many sent to in jails and forced labor camps.

An independent tribunal in London has unanimously concluded that prisoners of conscience, and primarily Falun Gong practitioners, have been—and continue to be—killed in China for their organs “on a significant scale.”

The campaign against Falun Gong is quite simply the largest, longest, most systematic, and costly campaign ever against a single group of people in China.

The Rise of Falun Gong - Dates