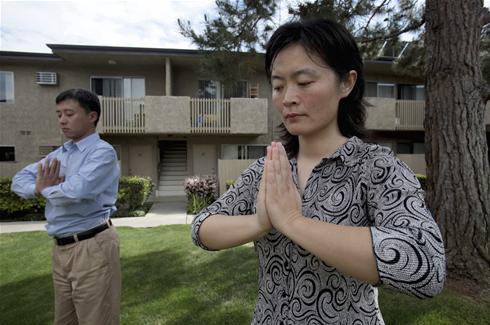 Alongside the most brutal forms of violence, such as torture and organ harvesting, a quiet, systemic form of violence being perpetrated against the Falun Gong on a large scale is destitution and internal displacement.

Although the number of Falun Gong adherents forced into homelessness and living as fugitives in their own country is currently unknown, hundreds of testimonies, and reports of tens of thousands of practitioners missing in mainland China suggest destitution is pervasive. There are several reasons for this phenomenon.

First, Falun Gong practitioners have been expelled from schools and dormitories, fired from their workplaces, and denied opportunities for re-employment because of their beliefs or open resistance to persecution (more on persecution at work and school). This situation, moreover, has persisted for over eight years.  Without any remaining financial means, those who can no longer rely on the support of family and friends are being driven into homelessness.

Second, adherents have been forced into bankruptcy due to robbery and extortion. Police, the 610 Office, and local officials have all been known to pillage the houses of adherents after arresting them. In other cases, police have forced family members to pay large extortion fees to secure the release of their relatives and spare them from torture.

Third, many adherents have become homeless fugitives in order to avoid further persecution. After being repeatedly jailed and tortured, and knowing the arbitrariness of such arrests that can take place whenever local officials receive new orders or whenever a major anniversary approaches, adherents have chosen to leave their homes and wander from place to place to escape their pursuers.

In addition to the 610 Office and local police forces, the Chinese Communist Party also employs a system of neighborhood and street committees. Much like the system employed in East Germany, this PRC version of neighborhood watch employs retirees who spend their days spying and reporting on their neighbors – not for stealing but for hanging posters, distributing leaflets, or meditating. With such a system in place, the Falun Gong cannot feel safe living in any single location for a prolonged period and roam like vagabonds from place to place.

Fourth, some adherents have left their homes in order to ease their family members’ suffering from police pressure. Harassment does not end when the Falun Gong are released from detention. After they return home adherents face frequent, sometimes daily, visits from local officials and police. The visitors try to find the whereabouts of other Falun Gong as well as make sure the newly released adherent is maintaining “correct views.” Such visits are not always cordial.

Finally, children of Falun Gong adherents have not been spared either. With both parents either jailed, fleeing persecution or killed, children as young as three-year-old Kaixin have had to fend for themselves. While some have gone to live with relatives or adherents who knew their parents, others have become homeless (news).

Some Falun Gong have been able to escape to Southeast Asia or other countries and find asylum thanks to their host nations. A much larger number, however, have become internally displaced or, as Chinese put it, gone into exile in their own country to escape persecution.

In addition to requiring their identification for renting an apartment or receiving a salary, Chinese citizens may be required to present their ID to police on whim at any moment. Afraid of being recognized as Falun Gong, and in some cases already on a public wanted list for the crime of distributing leaflets, adherents cannot establish a new life or feel secure anywhere in China.