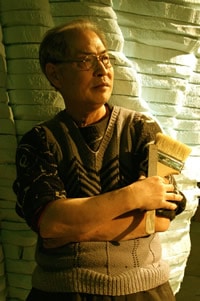 “When you draw a line, all your information such as your quality, morality, life experience, and even your health have been put into it,” explains the former art professor. “It is the reflection of your inner nature. So an artist must be a noble and moral person, and be a thoughtful person.”

There’s no doubt that Zhang’s life experiences show through his artwork.  One of his oil paintings, “The Red Wall,” symbolically depicts the reign of the Chinese Communist Party as a red, crumbling wall, the words “suppression” incised onto it.  A man, stripped down to his underwear, is shackled against it, tortured, but his spirit resilient.  Another practices meditation with a steely determination as he is doused with ice water.  And yet another stands in a torturous position against the wall as Chinese police stand watch.

The painting, says Zhang, is representative of what he went through when he returned to China in 2000 to tend to his elderly mother-in-law.

In July, 2000, Zhang was taken into police custody because he practiced Falun Gong.  He recalls the head of the police station telling him, as so many other Falun Gong practitioners across China had heard before, that they had been authorized from the highest levels to use any methods necessary to convert him.  Zhang was told that even if they were to beat him to death, the police would not be held responsible and it would be counted as a ‘suicide.’

Two policemen then began to torture Zhang with electric shock batons, threatening to shock his mouth if he attempted to call for help.

“You could smell the burning skin,” recalls Zhang.  His legs and arms were badly burned, and his left leg was left so injured that he had difficulty walking for three months.

Zhang was then sent to a detention center where 18 detainees were crammed into a space of 20 square meters.  The cell had no bed, so everyone slept on the cold, concrete floor.  There, the prisoners had to eat, sleep, and relieve themselves in the small and squalid cell.  Their meager meals consisted of boiled cabbage, and nothing more.  There was never enough to go around.

After his release, in October, 2000, Zhang was once again taken into detention for persisting in practicing Falun Gong. This time, he was forced to attend brainwashing sessions where authorities attempted to force Falun Gong practitioners to give up their belief.  If a person was not ‘reformed’ within 3 months, he or she would be made to take another 3-month brainwashing class. Repeated failure to denounce Falun Gong often resulted in a 3-year forced labor sentence. Adding insult to injury, Zhang and the others were forced to pay 10,000 Yuan (the equivalent of a full year’s salary) in “tuition.”

Zhang went on a hunger strike to protest his arbitrary confinement at the brainwashing center.  There, he was threatened that failure to accept food would land him in a mental hospital, where he would be force-fed through the nose.  After another six days on hunger strike, Zhang was sent to a hospital, and was released nine days later.

But the worst was yet to come.  On November 14, 2000, policemen forced their way into Zhang’s home and took him to a labor camp without any legal process.  During his physical check-up, he recalls the doctor asking is he would continue believing in Falun Gong.

“I said ‘Yes.’  The doctor told me, ‘If you continue to practice Falun Gong, you are going to die in here.’”

During his detention, Zhang was not allowed to have any contact with the outside world. He was forced to sit straight on a small bench day and night watching propaganda films attacking his spiritual belief. The labor camp guards enlisted criminals to monitor the Falun Gong adherents, who would beat them if they closed their eyes or lowered their heads. “Their goal was to keep us from having even one minute to be able to think independently,” says Zhang.  Those who protested against the treatment or attempted to practice Falun Gong meditation were sometimes burned or beaten unconscious.

In December, Zhang was transferred to the Wangchun labor camp, where the indoctrination and psychological torture escalated to a new level. Zhang was under constant surveillance by four or five people who surrounded him constantly debating and attempting to discredit Falun Gong.

“I was monitored twenty-four hours a day by a group of policemen. After days and nights of endless brainwashing, deception, coercion, and psychological attacks, I almost collapsed. Such mental torture was even worse than physical torture.”

He recalls the treatment that some of his fellow Falun Gong practitioners were subjected to as being even worse.  On one occasion, when one of them was being beaten to the edge of death, several dozen others intervened in his defense and asked the guards to relent.  Instead, each of the Falun Gong practitioners was tortured with eight high-voltage electric batons simultaneously.

One another occasion, Zhang recalls meeting a Falun Gong adherent from Qingdao City who had gone to Beijing to stage a peaceful protest against the persecution.  He was arrested and beaten unconscious.  Police took him to a remote location near Beijing and left him to die, yet he survived, only to return again to Beijing and continue appealing for justice. Upon being arrested again, the police used sandpaper to abrade the skin on his buttocks until it was completely rubbed off.

“The pain must have been beyond description,” says Zhang. “When he told me this episode, his whole body was trembling and he couldn’t stop crying.”

Shortly before his release, Zhang recalls that the labor camp guards began to treat him better, providing him with more food and easing their torture tactics.  Then, just before he was released,  and while video cameras rolled, he was asked to acknowledge the kindness of the guards.  Zhang, hoping to encourage the staff to be kind, complied.  He couldn’t have known that the footage would soon be turned into propaganda to prove that Falun Gong adherents were not mistreated during their ‘reeducation.’

With the help of Amnesty International and the Canadian government,  Zhang was released early from detention on January 10, 2001, and returned home to Canada with a renewed determination to expose the persecution he had been through.

He began traveling the world to talk about his nightmarish experiences at the hands of the Chinese Communist regime, speaking to the news media and even at the United Nations Human Rights Commission in Geneva.  In recent years, Zhang has been a leading plaintiff in a lawsuit in Canada against former Chinese president Jiang Zemin, charging him with genocide and crimes against humanity for his role in initiating the persecution of Falun Gong.

But for Zhang, the most effective way to educate the world about the ongoing persecution in China is through his art.

In 2003, Zhang and a number of other Falun Gong artists began working on an art exhibit that would depict the treatment of practitioners in China. Their purpose is not just to raise awareness of the persecution in China, he says, but also to as inspire positive values of courage, kindness, and purity.  Since then, their art exhibit has toured the world, touching audiences everywhere it goes.

Zhang says that since taking up Falun Gong, the quality of his work has improved substantially.

“Throughout their entire lives, these artists had searched for a pure and unblemished way to express themselves through their art but couldn’t find it. They were only able to recover their pure mindsets through Falun Gong practice. After they purified their minds, they have been able to free themselves of the influence of innumerable notions and found their true identities. Only then were they able to express the sides of themselves that are naturally good and kind,” explains Zhang.

Zhang believes that if he can convey Falun Gong’s values of “Truthfulness, Compassion and Tolerance” through his art,  he can,  in his own way,  make the world a better place,  and one which will be safe from persecution for generations to come.

“The reason Jiang Zemin and the Communist regime could persecution Falun Gong is that they have attacked and destroyed traditional values and morality, turning China into a mess.

“I want to tell people a truth through my painting. In the universe there is a principle that nobody can escape: Good deeds will be rewarded with good, while wrongdoing and malicious deeds will meet with retribution. Falun Gong teaches people to be good people, but the [Communist regime] brutally persecutes them. For everyone, their attitudes and behavior will determined their future.”

Picking Up the Pieces