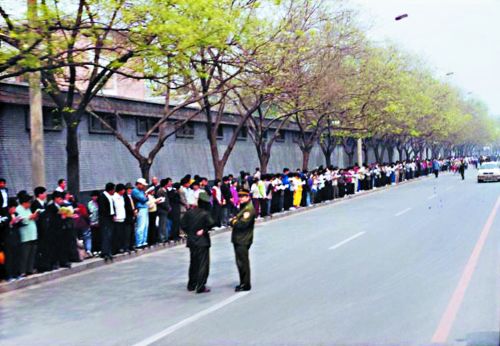 On April 25th, 1999, over 10,000 Falun Gong adherents gathered at Chinas central appeals office near Zhongnanhai to seek an end to mounting government harassment

1997
The Public Security Bureau conducts an investigation into whether Falun Gong should be deemed an “evil cult,” but the investigation concludes: “no evidence found thus far.” (report)

Attacks on Falun Gong continue in state-run media. The Falun Gong respond to the critiques by visiting, and sometimes petitioning outside, the local newspaper or television stations in order to explain what Falun Gong is and clear their reputation. Such events take place in Beijing, Tianjin, Guangzhou, and other major cities.

April 1999
He Zuoxiu, a prominent Marxist-atheist, disparages Falun Gong and qigong in general in a Tianjin college magazine. Local Falun Gong gather in Tianjin, asking the magazine to repair the damage done to their reputation.

Although the gathering is peaceful, on April 23 and 24, riot police is sent, 45 practitioners are arrested and some are beaten.  When practitioners ask Tianjin authorities to release those who were arrested, they are told that the orders came from Beijing; if they want to petition, they were told, they must go to the capital.

April 25, 1999
The following day, on April 25, over 10,000 adherents from Beijing, nearby Tianjin, and other cities in the area gather outside the State Council Office of Petitions in Beijing.

The office is located right next door to Zhongnanhai, the Communist Party leaders’ residential compound. In spite of the Party’s later accusation that the Falun Gong “seized” Zhongnanhai, the gathering is actually remarkably peaceful and orderly, with adherents keeping entrances, exits, and footpaths clear – as also reported by Western media.

Adherents request that those arrested in Tianjin be released, that the ban on publishing Falun Gong books be lifted, and that they be able to resume their practice without government interference.

Then-Prime Minister Zhu Rongji meets with Falun Gong representatives in his office. By the end of the day, those arrested in Tianjin are released and the gathering quietly disperses.

Within hours, however, then-Communist Party leader Jiang Zemin opposes Zhu’s assuaging position, and states that if it cannot defeat Falun Gong, the Party will become a “laughing stock.” (report)

June 10, 1999
Jiang Zemin creates the 6-10 Office, a secret security agency with a mandate to eradicate Falun Gong. Jiang grants it authority over all local levels of police, government, and courts, and the 6-10 Office later becomes the primary tool for arresting, torturing, and killing the Falun Gong. (more on 6-10 Office)

July 1999
From the April 25 gathering until mid July, adherents throughout China report being followed and interrogated by plainclothes police officers, as the Party collects lists of adherents and makes final preparations for the ensuing ban.

On July 20, 1999 police begin arresting adherents that they consider to be key organizers. On July 22, 1999 a media blitz commences. Airwaves, television screens, and newspapers columns are filled with attacks on Falun Gong. Sound trucks drive around city streets and college campuses warning people that practicing Falun Gong is now illegal. Among the ban’s stipulations, protesting the ban is also banned. (report)

October 1999
Falun Gong adherents hold a secret press conference for foreign media in Beijing aiming to expose the persecution they are facing. At the end of the press briefing, participants are arrested. Ms. Ding Yan, one of the adherents who spoke at the press briefing, is later tortured to death in custody.

Winter 1999-2000
As rounds of arrest continue and the first reports of deaths from torture in custody emerge, the Falun Gong throughout China travel to Beijing to petition their government and appeal to the world for help by meditating or raising banners on Tiananmen Square. The banners often simply say: “Falun Dafa hao” (Falun Dafa is good).

International media repeatedly capture images of police pouncing on people meditating on the square and beating them to the ground before taking them away. (report)

January 2001
State-run media claim that several Falun Gong practitioners ignited themselves in protests on Tiananmen Square. The so-called self-immolation becomes the centerpiece of the Party’s propaganda against Falun Gong and is used to give credence to what had by then become an increasingly unpopular campaign.

Although most foreign media simply copy-paste the reports from Party mouthpieces Xinhua News Agency and China Central Television, the self-immolation incident appears increasingly suspicious, not least because Falun Gong teachings consider suicide a sin. Investigations by the Washington Post and others, most notably slow-motion analysis of the Party’s own video footage, poke hole after hole in the Party’s version of the story and raise alarming questions (http://faluninfo.net/tiananmen/immolation.asp).

March 5, 2002
Falun Gong practitioners in northeastern Changchun city tap into state-run television broadcasts. They air 45 minutes of video that otherwise cannot be seen in China, including how Falun Gong is practiced freely outside of China yet persecuted in the mainland. (news)

Over three days, the city of Changchun turns into chaos as some 5,000 people are arrested; the number of deaths during those days remains unknown (news). Of those who participate in the broadcast, several are later tortured to death in custody, including Mr. Liu Chengjun, the subject of an Amnesty International urgent action (news). Similar overrunning of broadcast signals continues sporadically throughout China in the following years.

November 2002
Hu Jintao begins officially taking over the leadership from Jiang, although Jiang and his highly-placed supporters who have been wedded to the persecution of Falun Gong – primarily Luo Gan, Zhou Yongkang, Liu Jing, Li Lanqing, and Zeng Qinghong – continue to push the campaign.

July 2004
The number of documented cases of Falun Gong adherents who died as a result of the persecution, mostly due to torture in custody, reaches 1,000. Estimates place the actual number of deaths at over 10,000 deaths.

The Nine Commentaries includes a chapter about the persecution of Falun Gong (full chapter text),  and sets of a wave of denunciations and withdrawals from the Party and its affiliated organizations throughout China and the Chinese diaspora (see http://www.ninecommentaries.com/).

December 2004
Prominent human rights attorney Gao Zhisheng in Beijing writes to the National People’s Congress about the persecution of Falun Gong.  In the following months Gao’s firm is shut down, he is disbarred, stalked, put under house arrest, and eventually detained – largely because of his outspoken stance on the sensitive Falun Gong issue and because he resigned from the CCP. Attorney Guo Guoting (report) had previously spoken out against the persecution and was subsequently disbarred (Gao Zhisheng book in English A China More Just)

June 2005
The number of documented cases of Falun Gong adherents killed as a result of the persecution exceeds 2,500 (news).

March 2006
A woman who had worked in a Chinese hospital and a Chinese journalist step forward to reveal that Falun Gong practitioners in northeastern Sujiatun are being killed by the thousands for their organs. As evidence from investigation mounts in the following weeks, a Chinese military doctor comes forward to reveal that the atrocities are taking place throughout the country (more on Organ Harvesting).

March 2007
The number of documented cases of Falun Gong practitioners in China killed as a result of the persecution surpasses 3,000 (news). Estimates place the number of actual deaths at many times higher.

The Falun Dafa Information Center reports that over 8,000 Falun Gong adherents were reported to have been taken into custody from December 2007 – May 2008 as part of a pre-Olympic campaign of arrests. Several adherents die of torture within days or weeks of being taken into detention,  and many others are sentenced to lengthy prison terms