He Lizhi: A Story of Justice Denied 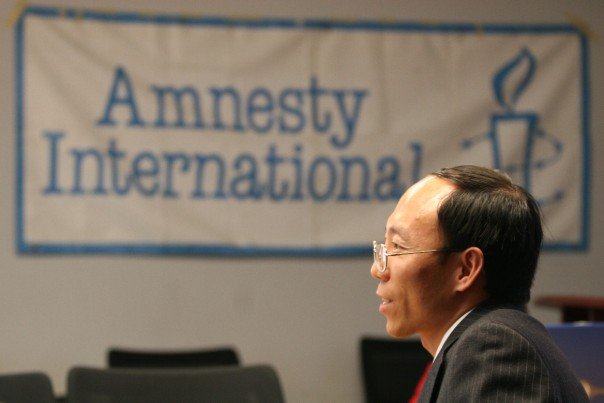 He Lizhi, a former Amnesty International prisoner of conscience, speaks of his experience being imprisoned and tortured in China

You would hardly know it from looking at Lizhi He that he has been to hell and back in a Chinese labor camp.  The bespectacled Toronto engineer possesses an almost otherworldly calm and radiates kindness with his gentle demeanor.  But just a few years ago,  Lizhi and his wife were engaged in an international battle against the Chinese Communist regime that was persecuting him.

Their story began in 1995, when Lizhi began practicing Falun Gong – an ancient Buddhist discipline of meditation and self-improvement.  Guided by Falun Gong’s moral philosophy based on the principles of Truthfulness, Compassion and Forbearance, the both he and his wife experienced a renewed love of life, becoming more patient and developed a positive outlook.

“Falun Gong enabled me to do a better job at my work,” recalls Lizhi.  “I was commended and respected by my colleagues since I was cooperative and accommodating, eager to help others, and demonstrated a strong work ethic and sense of responsibility.”

In his job as a senior engineer at the Beijing Iron & Steel Institute, Lizhi received numerous awards for his work in metallurgy, and was eventually promoted to work at the professional engineers qualification registration center.

But everything changed when, in July of 1999, the regime in Beijing initiated a campaign to eradicate Falun Gong and forcefully ‘reform’ the tens of millions of Falun Gong adherents nationwide. Lizhi and his wife, both upstanding and peaceable professionals, were turned into enemies of the state they had worked so hard to serve.

The campaign of violence, brainwashing, and the constant stream of anti-Falun Gong propaganda in the state-run media quickly intensified. Then, on March 4 2000, Lizhi’s wife decided to take a stand.

Like thousands of Falun Gong practitioners before her, she went to Tiananmen Square to stage a symbolic peaceful protest against the persecution of Falun Gong.

When she did not return home, Lizhi went looking for her.  He entered the square,  where plain-clothed police officers approached him and asked if he practiced Falun Gong.

“I couldn’t lie,” he says. “Falun Gong teaches me to be an honest person under all circumstances.  So I said yes.”

Within seconds, a police van had arrived on the spot.  Police officers jumped out and accosted Lizhi, shoving him into the police van and yelling that anyone who practices Falun Gong is sub-human.

Lizhi spent the next two weeks at the Xuanwu district detention center in Beijing. Upon his release, he was kept under house arrest and was forced to watch propaganda videos attacking his spiritual beliefs.

Not long thereafter, Lizhi and his wife had their application for emigration to Canada approved.  But something held Lizhi back—a feeling that he had to do more to educate his fellow citizens about the persecution of Falun Gong that was hidden from the public eye.

“In China, Falun Dafa, which brings goodness to both the country and it’s people, is viciously slandered and framed, it’s innocent practitioners are persecuted, and the regime’s propaganda is confounding right and wrong, causing so many people to be deceived. So I felt an obligation to clarify the truth about Falun Gong,” he says.

Lizhi sent letters to some colleagues and friends telling them about his experiences with the practice of Falun Gong and about its persecution by the Chinese regime.  He had no way of knowing that police officers had been watching him when he mailed the letters.

The retribution came quickly. On July 21, 2000, State Security Bureau officers broke into Lizhi’s office and took him into custody, and ransacked his home and office.  He was charged with “attempting to create turmoil, destroy Chinese reform achievements and the hard-earned stable political situation.”

“It was frighteningly reminiscent of the Cultural Revolution,” he recalls.

Lizhi’s wife set out to find him legal representation for his trial,  but there was no justice to be found.  Shortly after the persecution of Falun Gong began, the regime prohibited lawyers from accepting cases from Falun Gong adherents; they were legal non-persons, stripped of all constitutional rights.

Yet some lawyers weren’t so easily cowed.  Lizhi’s wife found an attorney willing to take the case who had previously attempted to defend a Falun Gong adherent,  but the government disbarred him for doing so.

She soon found another lawyer for her beleaguered husband.  Shortly after he accepted the case, however, the police began to investigate and harass his family. His car was broken into, and documents related to Lizhi’s case were stolen.  The lawyer was being followed.  He soon dropped the case, fearful over the safety of his wife and children.

Lizhi’s case when to trial at the Haidian Court on December 5, 2000. He was interrupted while attempting to defend himself; his statements were omitted from the court record.  When Lizhi’s attorney pointed out that the State Security Bureau had broken the law when they read Lizhi’s letters to his friends, the judge responded that the State Security Bureau’s actions are state secrets and must not be discussed.

The short trial came to an abrupt end so that another Falun Gong practitioner could be tried.  It didn’t much matter – Lizhi’s sentence had already been decided by Communist Party cadres before his trial even begun.

He would spend the next three years in prison.

At first, Lizhi was transferred to the 7th division of the Beijing police department, where he was detained for two weeks with violent criminals.  After that, he spent six more months at the Haidian district detention center. His cell was barely ten square meters, but was often crammed with up to 30 people, most of them violent criminals, drug dealers, and thieves.  The space was so cramped that lying down for sleep was nearly impossible.

“The air was foul,” says Lizhi. “We had to eat, sleep, and go to the bathroom in the same room. It was as if we were living in the restroom. For months we were detained in a dark room without sunshine.”

The guards arranged for four inmates to monitor Lizhi 24/7. He was forced to sit on the floor, legs bent, for entire days, and the slightest movement would earn him violent beatings.

Lizhi’s body soon began to rebel against his constant sitting. His skin began to fester; pus and blood soiled his underwear.  He recalls being itchy from head to toe with scabies, rendering him unable to sleep.

One day, just after New Years, Lizhi developed a high fever after other inmates had doused him with cold water.

“I felt sharp pain in the left side of my body, and could not breathe normally. Later I felt scorching pain in the chest and could not lie down to sleep. I tried to alleviate the pain by repeatedly changing my posture. I developed edema all over, and my skin festered around the nose and eye socket. At night I suffered sweating and dehydration.”

Other Falun Gong adherents at the detention center fared even worse. Lizhi recalls how, when new practitioners first arrived at the detention center, they were immediately stripped of their clothes, beaten, jabbed in the ribs, and doused in freezing-cold water to the laugher of the criminal inmates.  They were often forced to stand in the “aircraft” position, where a person is folded in half and forced to stand bent over with their back parallel to a wall, arms extended upwards.  They were beaten for moving.

The prison guards formed special relationships with the prison’s most violent offenders, soliciting their help in beating Falun Gong adherents in exchange for relaxed treatment or shortened sentences. Most were happy to comply.

One day, a Falun Gong practitioner from Henan province was brought to the detention center.  He refused to province the guards with his name of address for fear of endangering his family. Angered by his obstinate refusal to comply with the interrogators,  the guards handed the Falun Gong practitioner over to the violent criminals.  He was surrounded by a dozen of them, his head was covered, and he was beaten to the edge of consciousness. He was then brought to a wash basin, his head was kicked under the faucet, and the water was

“Witnessing such an atrocity and being unable to stop it, a deep guilt pressed upon my heart,” says Lizhi. “At the sight of such misery, I did not know how long I would be able hold up without suffering a mental collapse. The heart-wrenching cries of female practitioners being force-fed were often heard. The detention center is a hell on earth.”

Lizhi’s final 45 days at the Haidian detention center were spent with the high fever and chest pains that made it difficult to breathe. The week before he was to be transferred to another prison to serve out his sentence, a prison guard slipped a piece of paper into his cell and demanded that he sign it.  The document stated that the signatory was well-treated while in prison and was never abused.

On Valentine’s Day of 2001, Lizhi was transferred to the Qianwei Prison in Tianjin City near Beijing.  There, as with every other prison and labor camp in China, the guards were issued quotas for the number of Falun Gong adherents they could successfully “reform” and force renounce their belief.

Lizhi seemed an easy target:  his frail, sinewy frame had already been weakened by months of sleep deprivation, fever, and mental anguish.  The prison authorities believed that they could push him over the edge with electric baton torture and quickly force him to denounce Falun Gong.

To weaken his mind, Lizhi was not allowed to sleep.  He was forced to read literature demonizing Falun Gong, and was tortured regularly with the electric baton.  When he still didn’t give in to the guard’s demands, he was made to run, jump and do push-ups in bitter cold winds. The sweat on his clothes would quickly turn to ice in the northern Chinese winter as he was then made to stand outside for lengths of time.

Lizhi began to cough and excrete blood in his urine.  His legs and feet swelled up, making it hard to walk.  During a visit to the prison infirmary, he was diagnosed with Tuberculosis, contracted during his prison stay.

After 50 days of treatment for the disease, Lizhi was sent back to his cell.  The TB treatment left him with pains in his liver and frequent diarrhea.

In November, 2001, Lizhi was sent to the Qianjin prison, where he would spend the next two years.  In spite of his deteriorating physical condition, he was forced to perform heavy labor, digging ditches for 10 hours everyday.

“After one day’s work I was too tired to stand up straight. Due to excessive labor, I could not sleep the whole night. I felt so much pain in my spine that I could not lay on my back. But on the next day, I was forced to do the same work again,” says Lizhi. “My torment was suffocating.”

On the other side of the world,  meanwhile,  Lizhi’s plight was gaining attention as his wife—now safely in Canada—lobbied for his safety.

Lizhi became an Amnesty International prisoner of conscience.  Parliamentarians demanded his release, and thousands of Canadians participated in his rescue campaign.  Finally, after three years in detention, Lizhi was released.  The Canadian Ministry of Immigration placed priority on his case and in May, 2005, he successfully arrived in Canada to be reunited with his wife.

“Those years of agony passed like a nightmare,” says Lizhi as he thinks back at his time in prison.  “But I never wavered in my belief in Falun Dafa, never lost faith in its principles of Truthfulness, Compassion, and Tolerance.”