Beijing Reporters, Tear Down This Firewall (and How To) 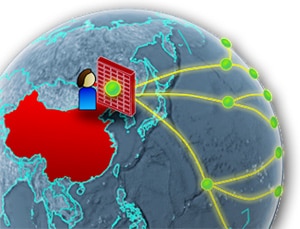 NEW YORK — With the International Olympic Committee having admitted prior consent to the Chinese authorities to block access for foreign reporters to certain websites (article), the Falun Dafa Information Center, in cooperation with Internet freedom activists, hereby offers journalists in Beijing a resource to gain free access to information during their stay in China.

The Global Internet Freedom Consortium (GIFC) is an organization founded by Falun Gong practitioners, offering tools that allow anonymous, secure access from within China to websites normally accessible outside of the CCP’s filters. The GIFC’s secure gateway services handle over 90 percent of the anti-censorship internet traffic from China and Iran, amounting to more than 400 million hits per day.

The tools available on the GIFC’s http://internetfreedom.org website are the very same tools that millions of Chinese citizens employ to access information blocked by the CCP. They operate by scattering web requests across a dynamic network of servers outside China, then re-assembling the encrypted data into a normal web page on the user’s computer.

In addition to allowing access to otherwise filtered sites, these tools also assist users inside China in keeping the details of their Internet usage, including passwords, safe from Beijing’s army of internet monitors. GIFC researchers and recent information released by Senator Brownback (article) indicate that such surveillance is especially active in the run-up to and during the Olympics, as the authorities attempt to secure information from the computers of visiting journalists, diplomats and foreign travelers.

It is recommended that these tools be downloaded and installed before arriving in Beijing, if possible, to ensure unrestricted access to the real internetfreedom.org website. Chinese security agents are known to have created fake versions of the site that do not provide these tools and may even install viruses or monitoring software on a user’s computer. However, those already in Beijing could also visit this website from their bureau headquarters, which normally has unrestricted access to the Internet. Another alternative is to obtain the tools from a colleague in the reporter’s home office outside China via a virtual private network (VPN) connection.

After the initial outcry from reporters in Beijing over Internet restrictions, GIFC researchers and media reports indicate that the CCP has begun to allow reporters to have access to some previously-blocked sites, such as Amnesty International’s or the BBC in Chinese, but Falun Gong-related websites remain blocked.

“Based on our experience, the overwhelming reason for the CCP to block a website is not because it may have harmful content, such as pornography or excessive violence,” says GIFC’s chief technologist, Mr. Bill Xia. “The main reason they block a website is because they are trying to cover up human rights abuses and other crimes carried out by the state. So, the real question here, I think, is why are they so afraid of journalists having free access to information about Falun Gong?”

One possible reason is that in preparing to host the Olympics, there has been a sharp increase in arrests and brutality against Falun Gong practitioners. In a July report, the Center detailed a campaign of door-to-door arrests in which thousands of Falun Gong practitioners have been detained, with many subsequently sentenced without trial to forced labor camps for two to three years (news).

Indeed, since their inception, much of the CCP’s Internet monitoring efforts have positioned information about Falun Gong as a key target. “Falun Gong” and related terms (about) have been on the short list of blocked keywords, often in the top position, ever since the persecution of Falun Gong began in 1999 (see Harvard University’s Open Net Initiative Report on Internet filtering).

More recently, according to a May 20, 2008 Washington Post report, California-based Cisco Systems prepared an internal document indicating that one of the main objectives of China’s “Golden Shield Project” — a multi-billion dollar initiative to restrict and monitor Internet usage inside China — was to “combat the Falun Gong.” (news) Cisco Systems is reportedly one of the largest suppliers of technology to the Golden Shield Project.