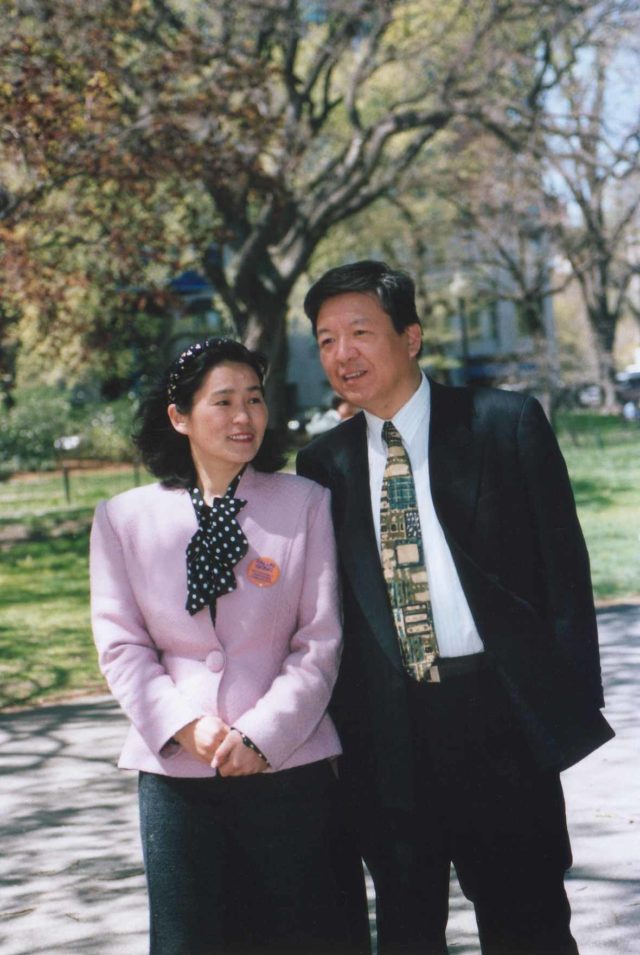 Shenli Lin with his wife Jinyu in Montreal, Canada

With only the sounds of their footsteps, the police escorted Shenli Lin and his wife Jinyu hand in hand down the hall to the top of the stairs. Jinyu wasn’t allowed to go any further. Shenli turned his head and smiled goodbye. He walked down the stairs and out to a waiting police car. The police loaded him in. Jinyu stared from their living room window, not realizing that it would be two years before she would see her husband again.

Having learned about Falun Dafa in Montreal during the summer of 1997, Jingyu moved back to Shanghai six months later. She joined a local Falun Dafa reading group. At that time, Falun Dafa had been flourishing in China for over 5 years, and tens of millions of people were practicing it every day. It was here, at this reading group in January 1998, that she first met Shenli. “He didn’t say very much, but he always had a wonderful smile on his face.” Although they didn’t talk much with their friends and family about their relationship, it must have been developing quite steadily because everyone enjoyed a lovely wedding in early 1999. “Many family and friends came. There were a lot of people. It was wonderful,” remembers Jinyu.

Soon after, the newlyweds decided that they wanted to make a life for themselves in Canada. Jinyu returned to Canada to begin preparations for their move back there, while Shenli remained in China. Shenli was a very active volunteer in the Falun Dafa community in Shanghai and many people knew him. Then the persecution of Falun Dafa began on July 20, 1999. The police took Shenli in for 10 hours or so of interrogation each day. He had to stop working and rely on his savings for survival. About a month and half later Jingyu returned to China to be with her husband.

She arrived to find that her husband was being taken away for interrogation every day from 10 a.m. to 8 p.m. Their phones where tapped. Jinyu was followed wherever she went. Shortly after her arrival, both she and Shenli were ordered under house arrest. Deciding not to obey the unjust order, the two continued going about their lives as normal. However, everywhere they went, the police followed.

The pressure on their daily lives subsided temporarily after Shenli and Jinyu moved to live in another suburb of the city. They took the opportunity to head to the Canadian Embassy in Beijing to apply for a visa for Shenli.

“Why should we let them arrest us? There was absolutely no reason for such treatment,” Shenli had said.

Soon, however, the following resumed. The couple watched as the already tense situation surrounding them heightened. Nearby practitioners and their families were disappearing constantly, often in the middle of the night. TV and newspapers carried reams of propaganda attacking Falun Gong and distorting the facts. “There was defamation everywhere all the time,” Shenli recalled. The couple decided that they must do something. They decided to travel to Beijing and visit the national appeal office, the last mode of appeal available to citizens to make their concerns known. Jinyu recalls thinking, “If we don’t speak out for Falun Dafa, who will? How can we let all those people just be lied to?” It seemed very simple to her at the time, but it led to a very difficult two years.

At the appeal office, Jinyu and Shenli were made to sit on the floor without food for over 8 hours. When told to write about the reason for their trip to the appeal office Jinyu and Shenli made the following requests: “Lift the ban and stop the persecution of Falun Gong. Release all practitioners in detention and restore the founder’s good name.” Over the course of the day the number of practitioners held in the room rose to more than 50. Once nightfall came, the police vans rolled in and everyone was taken away.

Jinyu and Shenli were taken to another location in Beijing. From the outside, it did not appear to be a police station. The next morning, they were told that the building was a hostel and that their detention would cost them 150 yuan. The two were then escorted back to Shanghai.

Since Jinyu is a Canadian citizen, she was told to leave the country within 48 hours and she was sent home. Jinyu was sitting alone in the apartment, gathering together what she could when suddenly Shenli came walking in the door escorted by two police. They softly embraced each other’s arms. The policeman told her, “Your husband is an enemy of the state.”

“I had to laugh because it sounded so ridiculous. Then I told the police very seriously, ‘You don’t understand Falun Gong. We’re good people. You shouldn’t do this…you shouldn’t persecute such people…your own people.’” Shenli smiles as she recounts the story, saying, “they didn’t know what to say and stood there with their mouths wide open.”

Not knowing she wouldn’t see her husband for two years, Jingyu went to the detention center that evening to take her husband some clean clothes. They refused to accept the clothes, so Jinyu began to talk to them about Falun Gong. Soon, she drew a small crowd. Bystanders concerned for her safety advised her not to talk about Falun Gong, so she turned and began to tell them how good Falun Gong really is and that they were being lied to in the media

Before leaving for the airport, she said to the police who were escorting her and all the people passing on the street, “This persecution is wrong. Falun Gong is truly something good and beneficial to tens of millions! I will be back!”

Once Jinyu arrived in Canada she continued to work on bringing Shenli to Canada. One day, the Canadian Consulate called to say that they had approved his visa, but it was too late. Shenli had been sent to the Dafan Labor Camp a day earlier.

Three criminals repeatedly beat Shenli in his cell. Shenli decided not to silently endure this brutality, so he told the warden, “There are only two ways for me to leave this labor camp. One way is that you beat me to death. The other is that, armed with Truthfulness, Compassion and Forbearance, I touch the hearts of the people in this place so they will change and not do such terrible things anymore, and then I will leave with dignity. But you will not change me!”

The wardens then changed their tactics, sending him to brainwashing “classes” and forcing him to work for more than 12 hours a day. Shenli would leave in the morning when the stars were still shining and return in the moonlit night.

His buttocks blistered from sitting on metal stools for twelve-hour shifts or more each day. He broke out in skin rashes. When his clothes moved, his flesh would tear. “The pain was like a knife digging into my heart. Then I recited (the foreward to the Falun Dafa book) about 30 times and my heart became calm and peaceful. I was determined that nothing would change me.”

Later, Shenli would write of his ordeal, “I went through a lot of hardships which are beyond my ability to describe. As a human being I lost all my rights and freedom in an instant. I was beaten and was forced to do physical labour. It was an extremely abusive and dark environment. I was surrounded by criminals, bombarded with all kinds of evil lies and propaganda about Falun Dafa, kept in isolation from my family and friends, and was under a state of perpetual pressure to give up my beliefs. What kind of suffering was it? It was enough to destroy a person’s will.”

Jinyu started by writing over 300 letters to the Canadian government. She sat in front of the Chinese embassy in Ottawa for 2 weeks around the clock and carried on a hunger strike for 5 days. She participated in the 4000km SOS walk across Canada to rescue Falun Gong practitioners persecuted in China. During the process, many Members of Parliament, Mayors and other government officials have offered a great deal of help. Amnesty International initiated rescue campaigns around the world. More than 100 university professors replied to a call to rescue Shenli. Thousands of Canadians appealed to Prime Minister Jean Chretien, calling for an end to the persecution of Falun Gong and urging Canada to step forward to help gain Shenli’s release.

After two years, the international pressure became too much for China to bear, and in February of this year, Jinyu received word that Shenli would be coming to Canada. At Montreal’s Dorval Airport, Shenli walked out of the elevator and embraced his wife. A crowd of reporters and fellow practitioners gathered to welcome him. After two years of being confined to a cell, with the cameras rolling he was now facing 30 million Canadians. “First I want to show my appreciation to the Canadian government and people for your help in my rescue. I hope you continue in your efforts to stop the persecution in China.”

At a welcoming celebration at Concordia University, Member of Parliament Irwin Cotler, who had been instrumental in obtaining Shenli’s release, wrote in the guest book, “Your courage, your determination and dedication to each other, the support of Falun Gong all over the world and your inspirational values of Truth, Compassion and Tolerance – the values of our common humanity – made all of this possible. In respect and friendship, Irwin Cotler.”

In a speech given in early February shortly following his release, Shenli expresses no regret for his personal loss in working to expose the persecution: “For what I believe to be the truth, I was prepared to be imprisoned for the rest of my life. They then released me. What I did is by no means, and under no definition, a crime. What I did was righteous and just and I did not do it for myself. I only want to let the people of the world know the truth and to say a few fair words about Falun Dafa.”

“I am happy to be free here in Canada;” Shenli adds, “however, I ask, please don’t forget all the Falun Dafa practitioners who continue to suffer in China. Please show your support and help end this evil persecution soon! Thank you.”

Killing for Their Belief
Imprisoned & Tortured for Her Faith, Retired School Principal Dies in Police Custody