By  a Minghui correspondent in Liaoning Province, China | Nov 29, 2017 Ms. Song Shouyun, a Falun Gong practitioner, was arrested by local police on October 24, 2016. Zhaoyan City Detention Center officials called her family on September 28, 2017, advising that she had been taken to the No. 2 Hospital in Zhaoyan City and was in a coma and in critical condition.

859 Signatures in Support of Ms. Song

Ms. Song, 50, is a farmer. Her family members demand to know how someone in good health ended up in a coma. 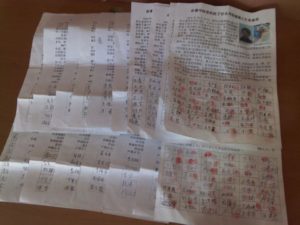 When they learned about Ms. Song’s ordeal, 859 people signed a petition in her support. One eyewitness shared details about what happened to her in the detention center.

Detained for Over a Year

Director Suo Jingdong and officers from the Nanshuangmiaoxiang Police Station ransacked Ms. Song’s home on October 24, 2016. They confiscated her personal belongings and arrested her. She was held in the Zhaoyang Women’s Detention Center, which is overseen by director BaoYingying and vice director Xu Jing.

She was tortured from the time she arrived in the detention center. She was forced to sit in a double lotus position for more than 14 hours each day and was brutally beaten if she moved. She developed sores on her ankles that got infected and festered.

Guards ordered inmates to beat her. They also stole her warm clothes and bedding, leaving her uncovered during the frigid winter.

She was only allowed to wear underwear during the winter of 2016. The windows were open during the day and there was no bedding for her at night. Her health deteriorated and she lost a lot of weight. Inmates also forced drugs down her throat and she was beaten until she bled.

Guard Xu Jing ordered several inmates to “wash” her on December 7, 2016. They stripped her, pinned her to the ground, poured cold water over her, and opened the window.

She was forced to stand for long periods of time starting in April 2017. Two inmates at a time watched her in two-hour shifts. She had to stand straight, and any movement prompted a beating.

The inmates took her money to buy things for themselves, disposed of her toiletries, made her buy more, and then disposed of them again.

While she was in the detention center, the local Zhaoyan Public Security Bureau, the procuratorate, and Zhaoyang Court framed her and sentenced her to a one-year prison term. By the time the verdict was reached, she only had three months left to serve, but they did not release her.

Ms. Song has been in the hospital for over two months and is still in a coma. Under the law, the Zhaoyang Detention Center officials are responsible for what happened to her while in their custody.

According to the law, the Zhaoyang Detention Center is strictly forbidden to torture detainees or abuse prisoners.

According to Chinese Criminal Law 251, the Zhaoyang Detention Center committed the crime of persecution.

According to Chinese Criminal Law 234, the Zhaoyang Detention Center committed the crime of causing intentional harm.

According to Chinese Criminal Law 248, the Zhaoyang Detention Center committed the crime of mistreating a detainee.

The law states that anyone who violates any of the laws above will incur sentences of up to 3 years in prison. For more serious infractions, the sentences will be from 3 to 10 years in prison. If a detainee was disabled or the mistreatment resulted in death, even longer sentences are mandated.