One hundred more Chinese citizens were sentenced to prison in December 2017 for refusing to renounce Falun Gong, a spiritual discipline being persecuted by the Chinese communist regime.

With 874 sentences of Falun Gong practitioners reported in the first 11 months of 2017, this number brings the total number of sentenced practitioners to 974.

After decades of communist rule, Chinese judges have long become the regime’s rubber stamp to deliver predetermined, unlawful sentences against dissidents and other targeted groups in show trials. In the persecution of Falun Gong, unlawful sentencing has been one of the most common tactics employed by the regime.

The 974 practitioners hail from 29 provinces and centrally-controlled municipalities. Liaoning Province reported the most convictions (179), followed by Shandong Province (108). Twenty-one other provinces reported double-digit sentencing cases, ranging from 11 to 80. The remaining six provinces reported under ten cases each. 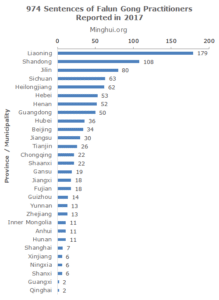 Every month of 2017 saw practitioners sentenced for their faith, with the most convictions in January (105) and the least in August (54). On average, about 75 practitioners were sentenced each month. 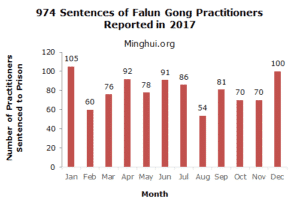 The average prison term for the 100 practitioners was 3.3 years, with the longest sentence being 10 years.

In addition to handing down prison terms, the courts also fined 24 practitioners a total of 451,000 yuan in December 2017, averaging 18,792 yuan per person. “Financial devastation” was one of the three directives proclaimed by former communist regime leader Jiang Zemin when he ordered the eradication of Falun Gong, along with destroying their “reputations and physical bodies.”

The practitioners sentenced were:

The 12 practitioners and another practitioner, Gong Wenyi, were arrested on January 18, 2017. The Songbei Procuratorate charged the 12 on July 17. Gong was released on medical bail. They were tried on September 22 in Songbei Court, and all pleaded not guilty. When the verdicts were announced on December 14, all the defendants were sentenced to prison with fines.

Four Liaoning Residents Sentenced to Prison on One Day

Officers from Lushun Police Department arrested four practitioners in Dalian, Liaoning Province, on June 28, 2016. The practitioners were Mr. Liu Renqiu, Ms. Sheng Jie, Ms. Wang Hongyu and Mr. Gu Shuchun. They were tried together in early 2017, and their verdicts came on December 22: Mr. Liu was sentenced to 10 years, Ms. Sheng to 7.5 years, Ms. Wang to 3.5 years, and Mr. Gu to 2 years. All of them have filed appeals to Dalian Intermediate Court.

Married Couple Imprisoned for Their Faith

Ms. Dong Zuozhen and her husband, Mr. Zhang Hongjiu, were arrested on August 29, 2016. The couple, who are from Songyuan, Jilin Province, was targeted because they refuse to renounce Falun Gong.

Ms. Dong was diagnosed with end-stage gallbladder cancer before she started practicing Falun Gong. She recovered from cancer after she picked up the practice. When she was detained, she was not allowed to practice, and she was later found to have gallstones. Even though her life was in danger, she was still tried and sentenced to 3 years and 4 months on November 30, 2017. She is now in Jilin Provincial Women’s Prison. Her husband, Mr. Zhang, was given 10 years in prison.

Mr. Liang Jianjun from Lechang, Guangdong Province, was seized at work on May 25, 2017, for refusing to renounce Falun Gong. His wife was threatened for trying to seek his release. Her young daughter was once home alone when police broke in, terrifying the school girl.

Mr. Liang appeared in court on November 7. His wife and daughter were barred from entering the courthouse. On December 26, the local court sentenced Mr. Liang to five years in prison.

Once Imprisoned for 5 Years, Former Government Employee Sentenced to 9 Years For Her Faith

Police in Jinzhong, Shanxi Province, arrested Ms. Wen Shuoyan on March 8, 2017, while she was at work. Her sister and her lawyer presented medical records pertaining to her schizophrenic son who required supervision and requested that she be released on bail. The request was denied. Ms. Wen appeared in court twice, on August 17 and again on December 25. Her lawyer entered a not-guilty plea on her behalf. The presiding judge sentenced her to 9 years soon after the second hearing. She is now appealing her sentence.

Ms. Wen formerly worked at the Taiyuan City Development and Reform Commission before the persecution of Falun Gong started in 1999. She was later arrested and served 5 years in prison. Her husband divorced her before she was released.