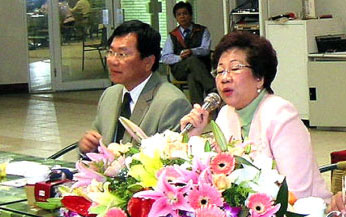 Vice-president of Taiwan Lu Hsiu-Lien (right) said that safeguarding human rights is a concern for all nationalities.

(Clearwisdom.net) Vice-president of Taiwan Lu Hsiu-Lien attended a gathering of the media in the Chiayi area on the afternoon of April 8, 2007. She called on people not to randomly go to Mainland China for organ transplants. She said, “Those organs are all taken from living people against their will.”

Vice-president Lu answered the questions raised by a reporter from the New Tang Dynasty Asia-Pacific Branch at the gathering. She said she had read Canada’s independent investigative report. She said, “The investigative report written by the Canadian MP and human rights lawyer shockingly found out that live organ harvesting has been taking place over the several past years in mainland areas. The CCP lied, saying that the organs for transplantation were from all executed prisoners. People from Taiwan, Japan and Southeast Asia went to China for organ transplants but never thought about where the organs were from.”

Lu Hsiu-Lien continued, “According to the investigative report, there were only over 1,000 death penalty prisoners per year in China, but there were over 60,000 cases of organ transplants during these same years.” She said in a sorrowful tone, “Where did so many organs come from? It is really horrible to contemplate. Reliable sources say that those organs were from illegally detained Falun Gong practitioners who were woken up late at night and had their organs harvested.”

The information shows that the US Senate and international media started reporting on the incidents of the CCP illegally harvesting organs from prisoners in China’s prisons and forced labor camps in 1994. In March 2006, the media exposed that the CCP had built secret concentration camps to illegally detain Falun Gong practitioners and harvest their organs for sale, then cremating the victims’ remains to destroy the evidence. The incident shocked and enraged people from all circles overseas. Canadian independent investigators David Matas and David Kilgour released their investigative report on July 6, 2006, entitled, “Report Into Allegations of Organs Harvesting of Falun Gong Practitioners in China.” They published the revised version of their report on January 31, 2007, entitled, “Bloody Harvest: Revised Report into Allegations of Organ Harvesting of Falun Gong Practitioners in China.” They collected even more hard evidence confirming that the CCP harvests organs from living practitioners. Their report once again verified the CCP’s inhuman atrocities.

Vice-president Lu Hsiu-Lien stated that there is no difference in nationalities with regard to safeguarding human rights. The live organ harvesting happening in Mainland China has really opened up the human rights issue. She hoped, through the media, to alert people not to go to the Mainland for organ transplants. She said, “If you carry an organ that was taken from a living, unwilling donor, you’ll never feel comfortable the rest of your life.”