May 13 to Mark Falun Dafa Day Around the World

Millions to Celebrate in 70 Countries 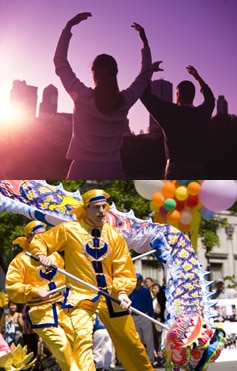 NEW YORK, NY — In as many as 70 or more countries this weekend, followers and supporters of Falun Dafa will gather to commemorate May 13 as “Falun Dafa Day,” the Falun Dafa Information Center announced Friday. The occasion, now in its eighth year, is expected to draw thousands all told, with activities taking place in settings as diverse as Paris, Sri Lanka, Hong Kong, Moscow, Tel Aviv, and Flushing, New York.

Photographers, the press, and a range of public officials are being invited to join the events. Colorful traditional Chinese costumes and dance will feature prominently in many of the event programs, and members of the Falun Dafa, including those who have escaped from religious persecution in China, will in most cases be on hand for interviews.

The occasion of May 13 is a mix of joy and concern—at once a tale of human betterment, of tragedy and oppression, and of hope and renewal.

The date marks first the beginnings of Falun Dafa (or “Falun Gong”). It was on May 13, 1992, that the teacher of Falun Dafa, Mr. Li Hongzhi, first introduced his program of Buddhist meditation and moral cultivation to the public. That gesture marked a wish, as adherents see it, to better the health and lives of others in a world plagued by illness, brokenness, and myriad forms of suffering. The practice was then, and has always since been, offered to all persons free of cost. By 1999 a study in China determined that over 70 million persons had taken up Falun Dafa, making it the fastest growing physical-spiritual discipline in perhaps the history of the world.

“In this sense, May 13 is about a commitment to wellness, both in oneself and in the lives of others,” said Information Center spokesperson Levi Browde. “Taking up Falun Dafa has been for millions of people a wonderfully positive, and proactive, choice to live a healthier life, physically and spiritually. It’s about becoming a better member of this world we share in.”

May 13 also serves to commemorate those less fortunate, particularly, those in China who do not enjoy freedoms found elsewhere. Adherents of Falun Dafa are brutally persecuted in China. China is ruled by a communist dictatorship hostile to spiritual beliefs and freedom of thought. Since July of 1999 China’s communist rulers have sought to “eradicate” the Falun Dafa and whoever dares follow it, enacting a violent program of arbitrary arrests and imprisonment, torture, propaganda, and brainwashing. Over 3,000 persons are known to have been beaten or tortured to death in custody, with hundreds of thousands more languishing in China’s prison and labor camp systems, where they are routinely abused.

“It is both urgent and imperative, we feel, that attention be called to the plight of China’s Falun Gong. The temptation is to look the other way, given the economic and business interests we in the free world have in China, but that risk is to wager nothing less than the loss of our own humanity, if not be complicit in what is an incredibly dire situation,” Browde said.

May 13 activities will have an unmistakably element of celebration, nevertheless, in that amidst the injustice in China there is a remarkable tale of courage and renewal unfolding.

Beaten down and suffocated by a communist state apparatus hostile to spiritual beliefs and their historical and cultural context, many followers of Falun Dafa have found new inspiration in China’s own past. That is, in traditional Chinese culture.

“It is a past free of communist tyranny, a civilization guided not by notions such as violent ‘class struggle’ but rather ‘virtue,’ ‘humanity,’ and ‘harmony.’ It has proved to be a wellspring of inspiration for many of us—an arena of self discovery and one in which to share with others values we hold dear,” Browde said.

Many of the weekend’s events will thus feature the likes of traditional Chinese fan dance and song, swordsmanship, lions and dragons, calligraphy, and ornate costumes.

While China’s Falun Dafa will not be able to celebrate openly, millions are expected to nonetheless mark the occasion privately and in their own ways. Past years have seen thousands of letters and greeting cards sent from China to the U.S., where Falun Dafa’s teacher now resides. Still others have taken to the streets of China to surreptitiously pass out informational materials exposing crimes against humanity perpetrated by Beijing’s regime. Many will likely join in a recently begun, nation-wide morning Falun Dafa exercise session, done in the safety of one’s own home and facilitated by a radio broadcast into China.

“We look at this as a small, but important, sign that large, untold numbers of people in China still make Falun Dafa a part of their life and are eager to see its persecution end… Even to the point they would risk their own freedom to hasten that process,” Browde said. “This gives our activities here in the free world a whole new dimension of meaning.”

News
Having Lost Her Husband to the Persecution of Falun Gong, 78-year-old Woman Gets Second Prison Term for Her Faith