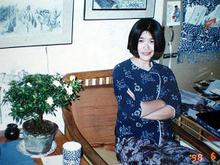 Xu Na, pictured here, was sentenced to three years in prison. In February, 2008, her husband died in police custody.

New York—The widow of a well-known musician and Falun Gong adherent who died from abuse in police custody was sentenced by a Beijing court to three years in prison Tuesday.

Ms. Xu Na, 40, an award-winning artist, was sentenced by Beijing’s Chongwen District Court in a hearing that lasted 15 minutes, according to news reports and sources inside China.

Her husband Yu Zhou, a popular folk band member, died in police custody in February, just eleven days after being detained with Xu at one of many check-points set up throughout Beijing in an effort to stamp out dissent before the Olympics. (see London Times, Amnesty International submission to United Nations)

Xu was charged Tuesday with “using a heretical organization to undermine implementation of the law,” a vague provision of the penal code commonly used to sentence Falun Gong adherents to prison terms of up to 12 years. (Amnesty report)

At the center of the charges were 53 documents and eight computer disks of Falun Gong-related material, her lawyer Mr. Cheng Hai told AFP. (news)

“That a woman could be sentenced to three years in prison for carrying a few leaflets and practicing her spiritual belief illustrates the fundamental injustice and arbitrariness of the Chinese legal system under the Communist Party,” says Falun Gong spokesman Erping Zhang.

“Xu Na’s sentencing and her husband’s death are a stark reminder that every Falun Gong practitioner, no matter how well-educated, non-violent, or well-known, is at risk of arrest, imprisonment and even death in China today.”

Xu’s parents were reportedly allowed to attend the hearing, but many others who wished to observe were denied entry. According to the lawyer Mr. Cheng, Xu intends to appeal.

Xu’s sentencing comes as a blow to her family, particularly since she was only released in 2006 after serving a five-year sentence for having lent her apartment to Falun Gong adherents traveling to Beijing to appeal to the authorities for an end to the persecution campaign. While in detention, she was reportedly subjected to torture, including beatings, sleep deprivation, forced-feeding, and being tied into uncomfortable positions for hours.

Xu is one of over 8,000 Falun Gong practitioners detained during the months leading up to the Olympics, many of whom remain in custody and face sentencing to prison or “re-education through labor” camps. (news)

The Falun Dafa Information Center is calling on the international community to: