What a Difference a Strait Makes 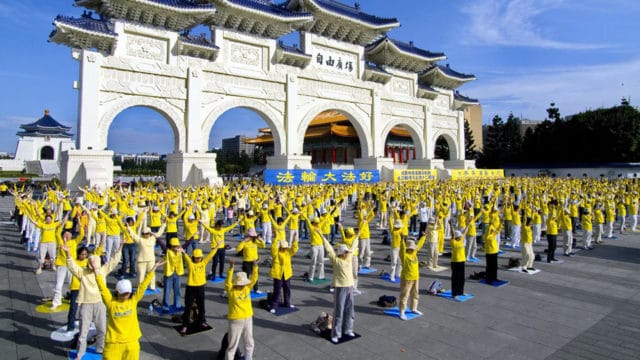 Separated by 100 miles, Taiwan and mainland China are worlds apart when it comes to basic freedoms and rights. While a remarkable democratic transition has mostly delivered the human rights goods in Taipei, in Beijing a Leninist system continues to persecute millions. Perhaps no example better illustrates this point than Falun Gong.

Consider the following: Wang Zhiwun, an engineer from Beijing, was kidnapped from his bed by police, illegally held in detention and most certainly tortured for six months before he was sentenced to 16 years in prison. The reason? Mr. Wang volunteered his time to help organize Falun Gong practice sites in Beijing.

Zhang Qingxi, a professor of economics at the National Taiwan University, has received congratulatory telegrams from Taiwan’s president and played host to the Mayor of Taipei during a recent Falun Dafa conference. The reason? Mr. Zhang volunteers his time to help organize Falun Gong practice sites in Taipei.

Sharing the same language and many of the same traditions, Taiwan and mainland China have followed divergent paths over the last six decades. Whereas 5,000 years of Chinese culture and history have been ravaged during half a century of Communist Party rule in the mainland, in Taiwan much of traditional Chinese culture has been preserved. An often-used example is that of Taiwan’s National Palace Museum. In retrospect, the Chinese art masterpieces it exhibits would have been destroyed during the Cultural Revolution had they not been moved out of China by the Nationalists in the 1940s. When it comes to Falun Gong, since 1999 Taiwan and mainland China could not have taken a more different approach.

In Taiwan, Falun Gong has become a cherished element in the fabric of society. The practice receives praise from the very highest government levels in both major parties. In the green camp, Vice President Annette Lu has been one of Falun Gong’s strongest long-time supporters; in the blue camp, former Taipei mayor and presidential candidate Ma Ying-Jeou has also spoken out strongly in support of the practice and against the persecution.

On the small island of Taiwan there are over 850 practice sites where people can go to learn Falun Gong free of charge. Several Falun Gong summer retreats for elementary and middle school teachers, endorsed by the board of education, have been organized over the past few years to introduce the principles of the practice to teachers as part of their continuing education.

It is true that Falun Gong practitioners can be found inside jails both in the People’s Republic and the Republic of China. But while in mainland China these prisoners¾who were kidnapped from their homes for meditating, seized while handing out leaflets, or arrested for posting information online¾are tortured and killed, in Taiwanese prisons Falun Gong practitioners appear as guests invited to speak to inmates about living upright, moral lives.

As was the case in mainland China before the persecution, in Taiwan one might strike up a conversation with a cab driver about Falun Gong only to find out that he himself practices, one might attend a concert and later find out the lead soprano is a practitioner, or one might go to a restaurant and see a cook quietly reading Zhuan Falun in the corner during an afternoon break.

The contrast has reached the point that travel guides encourage tourists to Taiwan to check out the Falun Gong activities there, where they can be seen in their “natural habitat.” Taiwan is sprinkled with Falun Gong posters on windows, paper lotus flower decorations, and people practicing the slow exercises in parks. It is just like it once was in China.