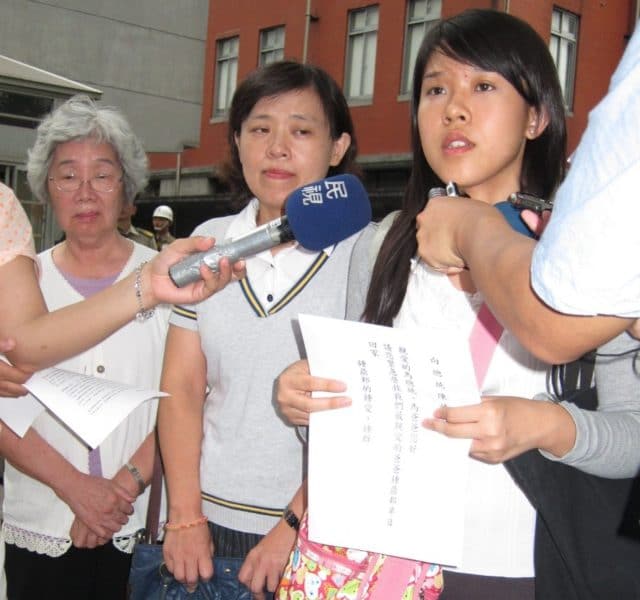 Chungs mother, wife, and daughter appeal at the Taiwanese Office of the President on June 27. (The Epoch Times)

NEW YORK—Chinese security agents abducted a Taiwanese businessman who practices Falun Gong from an airport in southern China last week, placing him at risk of torture and imprisonment. As thousands in Taiwan have offered support to his family, the Falun Dafa Information Center calls for his immediate and unconditional release.

“His relatives drove him to the airport and watched as he walked into the passenger-only area, but he didn’t arrive at the airport in Taiwan,” the man’s wife said at a press conference at Taiwan’s parliament on June 22. “We contacted his relatives in China immediately; they went to check and told us that he was taken away from the airport to ‘assist in an investigation of Falun Gong activities.’”

On June 18, Mr. Chung Ting-pang (???, Zhong Dingbang), a 53-year-old Taiwanese passport holder and manager at a high-tech firm, was abducted by Chinese security agents as he was preparing to board a plane at Ganzhou airport after visiting relatives for three days. According to The Epoch Times, sources in China indicate that Zhou Yongkang, the highest-ranking Communist Party official leading the campaign against Falun Gong, may have ordered Chung’s arrest himself.

“This incident—and the Taiwanese government’s ability to free Chung—has serious implications far beyond one man’s fate,” says Falun Gong spokesman Erping Zhang. “By having secret police arbitrarily abduct a Taiwanese businessman, Chinese Communist Party (CCP) officials have set a dangerous example for any Taiwanese going to China who may have done something that the CCP doesn’t like.”

Unlike in China, where it is persecuted, Falun Gong is freely practiced in Taiwan by tens of thousands of people, from professors to judges to construction workers (analysis). Early morning practice sites can be found in the parks of major cities and even small towns. The case has thus received widespread attention in Taiwanese media. Chung’s daughter, a recent college graduate, launched a Facebook page that to date has garnered over 8,000 supporters (link).

On June 27, the family submitted a petition to Taiwanese president Ma Ying-Jeou, urging him to prioritize rescuing Chung. They also asked president Ma that prior to Chung’s release, the Taiwanese government should appoint an attorney to help protect his rights, guarantee normal visiting opportunities for Chung’s relatives in China, and insist that Chung be allowed daily phone communication with his family in Taiwan. According to Taiwan’s Ministry of Justice, Chung is now in the custody of Ganzhou State Security Bureau.??

Eight days after Chung’s abduction and amidst growing calls from Taiwan for his release, China’s state-run Xinhua News Agency issued a report on June 26, confirming that Chung was in the custody of Chinese security agencies. The article said he is accused of sending to China equipment that could be used to “insert broadcasts” into television networks.

“We have to remember what Xinhua is—a mouthpiece for the Communist Party that has a long track record of spreading fabrications and inciting hatred, especially when it comes to Falun Gong,” says Erping Zhang. “It’s clear that the CCP is trying to come up with some excuse because they felt the need to say something after days of mounting pressure over Chung’s abduction.”

As for the allegations of Chung’s involvement in broadcasting uncensored information in China, it appears that he would not have had time to take such action during the current three-day trip. Even so, any effort to break through the CCP’s censorship should be welcomed, not punished.

“China is a closed society. The constitution guarantees people’s right to freedom of information and expression, but the CCP violates the constitution by censoring,” says Zhang. “The Party’s propaganda and lies are used to turn Chinese people against each other, even to the point of encouraging the torture and killing of innocent people.”

“Anyone broadcasting true information under such circumstances is literally saving lives. It is an act of courage that has been celebrated by Chinese people when it succeeded in the past.”

If Chung were involved in activities to break through Chinese censorship, his abduction is the latest chapter in the CCP’s systematic efforts to suppress Chinese people’s freedom to access information, especially when it comes to Falun Gong. Should he be prosecuted, he could face long-term imprisonment and torture after a sham trial, like mainland Chinese Falun Gong practitioners before him have (feature).

The Falun Dafa Information Center calls on the authorities in Jiangsu to immediately and unconditionally release Chung and allow him to rejoin his family in Taiwan. The Center urges the Taiwanese and other democratic governments to urgently raise Chung’s case with their Chinese counterparts, ensure his safe return to Taiwan, and guarantee the conditions requested by his family prior to his release.