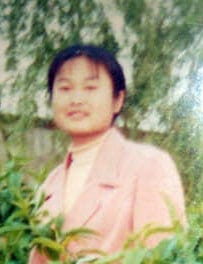 Ms. Liu Zhimei in an undated photo, taken before she was tortured and abused in a Chinese prison camp.

NEW YORK – The life of a top student at Beijing’s prestigious Tsinghua University has been ravaged by a decade of rape, torture and betrayals. According to reports recently received by the Falun Dafa Information Center, the once vibrant and brilliant young woman from Shandong Province, Ms. Liu Zhimei (???), now lives in a hut, regularly wets her bed, and crouches into the corner of her room with clenched fists whenever someone approaches her. Neighbors have seen her running from her home naked and screaming.

“When Chinese authorities talk of ‘transforming’ Falun Gong practitioners, this is what they mean,” says Falun Dafa Information Center executive director Levi Browde. “They abuse and torment healthy, rational people to the point where the victim either completely gives up his or her personal beliefs and submits to the will of the Chinese Communist Party, dies from abuse, or in the case of this young woman, is driven to the edge of sanity and completely robbed of all human dignity. They drive adherents to the point where life is a living hell.”

“Liu’s case is tragic, but sadly, all too common in China…so many lives have been utterly devastated in similar ways amidst the persecution of Falun Gong.”

In 1997, Liu was admitted to Tsinghua University with the highest entrance test scores in all of Shandong Province. Upon arriving on campus, she took up Falun Gong, which was practiced by over 1,000 students and faculty at Tsinghua at the time.

After the campaign to “eradicate” Falun Gong was launched in July 1999, Liu was expelled from school because of her practice. Police detained her on several occasions over the next three years. In custody, she was repeatedly beaten and held for prolonged periods in an isolation chamber. The torture left her with head and chest injuries, a limp in her step, and several missing fingernails.

In November 2002, Liu was “sentenced” in a sham trial to 12 years at the Shandong Province Women’s Prison because of her Falun Gong practice. While at the prison camp, she was pressured by Tsinghua University staff (who would visit her there) and prison officials to become a “helper” – one who helps prison officials coerce and torture steadfast Falun Gong practitioners into renouncing their practice and embracing the CCP’s hardline against Falun Gong – and as a reward, she could return to Tsinghua University as a student.

With the prospect of returning to school before her, Liu agreed. Reports from the prison indicate Liu devised methods for “transforming” fellow Falun Gong practitioners. On occasion, the prison guards coerced her to beat Falun Gong practitioners directly. Liu also began reviewing various subjects in preparation for returning to university. That opportunity, however, never came. As the years wore on inside the prison, she realized the promises of returning to Tsinghua were not true and she fell into despair.

On November 13, 2008, Liu was finally released to her parents’ custody, a mere shadow of the person she was ten years prior.

Liu does not remember her name. She has a large welt around her belly-button and excessive bruising about her buttocks and upper legs. Her breasts sag almost to her waistline though she is not yet 30 years old and she has an extreme deformity in one of her fingers.

Liu often and randomly yells out phrases that provide a glimpse into the torture she faced while imprisoned. While a relative changes her clothing, she will sometimes grab the relative’s hand to her breast and while beating her other breast yell “They beat me here, like this, it hurt so much…” Liu often wets her bed and when approached by someone she doesn’t know, cowers into a corner with fists clenched.

Liu’s mother passed away, in grief over Liu’s imprisonment, in 2007. Liu’s father, Liu Zuorui, had been a Communist Party secretary for the local village. Neighbors report that after Liu returned home, she has repeatedly fled her home naked, knocking on neighbors’ doors for help. Her father also let other men in the village take Liu to their home for several days at a time.

In 2009, local practitioners of Falun Gong took Liu into their home and took turns watching over her. Over several months, Liu showed signs of improvement. She mumbled to herself less and less, stopped wetting her bed, and could even cook simple meals for herself.

On the morning of April 16, 2010, officers from the Bailinzhuang Town Police Station in Laiyang City raided the home of the practitioners taking care of Liu. She, along with four other Falun Gong practitioners, were taken into custody. When interrogated by police, witnesses say she turned into a “completely different person,” professing her “guilt” and extolling the police for abducting her. These witnesses say Liu’s behavior is not uncommon for someone who, after extended periods of torture and pressure, learns to tell police whatever they want to hear in order to avoid further abuse.

Upon discovering she was not mentally stable, the police returned Liu to her father’s home where she remains today.

“Back in 2001, the Washington Post ran an in-depth story on how the Chinese regime was systematically using torture and ‘reeducation’ methods to break Falun Gong practitioners,” says Browde (news). “One of the victims interviewed by the Post concluded after going through the CCP ‘transformation’ process: ‘I have seen the worst of what man can do. We really are the worst animals on Earth.’”

“Liu’s case illustrates what this victim was talking about… the complete destruction of the human spirit. That is the story of Liu Zhimei, and tragically, the story of countless other Falun Gong practitioners who suffer under the CCP’s campaign to ‘eradicate’ Falun Gong.”

Abductions and Imprisonment
Separated More Than a Decade for Their Faith, Couple Torn Apart 20 Days Into Reunion