Is China Still Harvesting Organs From Its Political Prisoners? 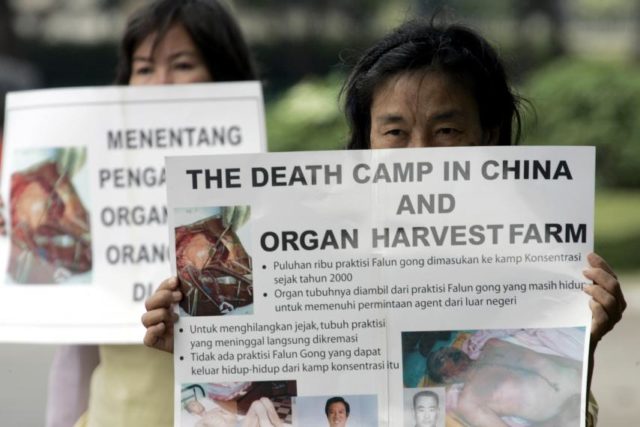 Government officials in China say U.S. lawmakers are fabricating accusations that the country is harvesting organs from its prisoners.

On the heels of Monday’s White House Organ Summit, several congressional lawmakers passed a resolution in the U.S. House condemning these acts. The resolution, HR 343, calls upon the U.S. Department of the State to conduct “a more detailed analysis of state-sanctioned organ harvesting from non-consenting prisoners of conscience” in China. It also requests that the State Department report on outcomes of an existing law that requires anyone engaged in the country’s coercive organ donor system be barred from obtaining visas.

According to the bill, Chinese authorities reported in 2011 that the majority of organs used for transplantation in the country came directly from executed prisoners. This includes a sizable number of organs from practitioners of Falun Gong (also known as Falun Dafa), a religious group that, according to the Falun Dafa Association, is “a spiritual practice rooted from ancient Chinese culture. It consists of meditative exercises and a moral philosophy centered on the tenets of truthfulness, compassion and tolerance.”

“China has been perpetuating perhaps some of the most gruesome and egregious human rights violations against the Falun Gong and other prisoners of conscience, yet has hardly faced any criticism, let alone sanctions, for these abuses,” Republican Representative Ileana Ros-Lehtinen of Florida, who authored the measure, said in a press statement this week. “The regime’s ghoulish and inhumane practice of robbing individuals of their freedom, throwing them in labor camps or prisons, and then executing them and harvesting their organs for transplants is way beyond the pale of comprehension and must be opposed universally and ended unconditionally.”

Statements made in late 2014 by Chinese government officials led the media to believe the country planned to end these practices in January 2015. However, many human rights advocates say the country continues to procure organs from involuntary prisoners.

The U.S. Commission on International Religious Freedom reported earlier this year that in 2015 thousands of Falun Gong practitioners were arrested and sent to detention centers, where they endured acts of torture and were eventually executed. And experts say years of in-depth investigation and case reports into the matter have provided details of a donor system in which prisoners are ostensibly executed for made-to-order organs.

Research undertaken by the Falun Dafa Association, for example, shows an extraordinarily short waiting period experienced by organ transplant patients in China compared with other countries, such as the U.S. In the U.S., the average wait time for a liver is two years and three years for a kidney. However, in China, patients typically must wait only a few weeks for a donor organ. Reports find this short wait time also applies to outsiders who visit the country for “transplant tourism” and pay top dollar for an organ. The Falun Dafa Association argues that in China patients aren’t waiting for organs. Rather, organs are waiting for patients.

According to a paper co-authored in 2011 by Jiefu Huang, former deputy minister of public health of China, and published in The Lancet, China has conducted around 10,000 organ transplants each year since 2008. Jiefu estimated that approximately 65 percent of organs transplanted each year come from death row prisoners.

Unlike countries like the U.S., China does not currently have a system where citizens can opt in to become post-mortem donors. Last year, more than 30,000 transplants were conducted in the U.S.—three times as many as China, but still nowhere near enough to meet the demand of the more than 120,000 patients still on waiting lists in the U.S.

In 2011, Arthur Caplan, director of medical ethics at NYU Langone Medical Center’s department of population health, recommended a boycott of organ transplant–related research from China. In a paper he authored for The Lancet, Caplan suggested the international biomedical community bar scientists from presenting at meetings, publishing papers in journals and collaborating on research related to transplantation, unless it can be verified that the organs sourced for the research did not come from executed prisoners. Caplan says eight major journals agreed to decline any papers submitted by researchers in China on organ transplantation.

“To give credit, they’ve started a little bit to set up the beginnings of a cadaver system, but it’s culturally difficult for China,” says Caplan. In 2010, for example, the government implemented a pilot program to procure organs from cardiac patients. The country also set up its first national electronic organ allocation system database.

Experts say China’s system does not comply with the World Health Organization’s criteria that requires transparency and traceability of all organs, and that all donations be voluntary and not involve currency exchange.

In the U.S., the first organ donor was a living person who gave his twin brother one of his kidneys. That was in 1954, and it took several decades for this sort of donation practice to gain wide acceptance. In 1968, the government instituted the Uniform Anatomical Gift Act, which created a medically and ethically sound framework under which organs could be donated and transplanted. But before the general public would embrace the practice, they needed, it appeared, to hear approval coming from religious leaders, including statements from the pope that the cadaver system didn’t go against the tenets of the Catholic Church. Since then, altruistic donation has gained acceptance, and the Vatican now even views organ donation as “a noble and meritorious act and is to be encouraged as an expression of generous solidarity.”

“It’s culturally difficult for many Chinese to donate organs of the deceased,” says Caplan. “But people forget every country has had that problem. We didn’t like it when it first started here. Sweden, Israel, Denmark, Japan—lots of countries have been through this. A scientifically sophisticated, medically sophisticated country like China should be coming around, and that’s what I hope this resolution will make clear.”