Inside China: Lawyer who Defended Falun Gong in Critical Condition 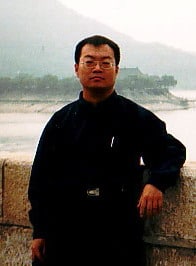 NEW YORK — A lawyer in southern China has been arbitrarily transferred to a brainwashing facility after serving a two-year prison term and is now believed to be in critical condition.

Starting in 2005, Zhu Yubiao (???) was one of the first lawyers in China to defend practitioners of Falun Gong. In July 2011, he was sentenced to two years in prison after blatantly unfair proceedings and Communist Party pressure on the presiding judge. Zhu was punished for his legal work and possession of Falun Gong-related materials in his home (report). According to Front Line Defenders, his sentence ended August 17, 2012, but he was immediately transferred to a brainwashing center known to target Falun Gong practitioners.

Zhu is protesting his ongoing detention with a hunger strike. Staff at the brainwashing facility, Guangdong Law Education Center  (????????) in Guangzhou’s Sanshui District, regularly force-feed him.  He now suffers from dangerously high blood pressure, according to family members.

“Zhu’s story is an all too typical example of how the Communist Party completely disregards China’s own laws and basic human dignity in its relentless effort to wipe out Falun Gong and those who seek to defend practitioners’ innocence,” says Levi Browde, Executive Director of the Falun Dafa Information Center.

“Behind the façade of a ‘legal education’ center in one of China’s most modern cities lies an Orwellian reality of brutal psychological abuse, torture, and killing.”

Zhu’s 76-year-old father, a retired physics professor at Sun Yat-Sen Univerity, attempted to collect his son from Beijiang Prison in Guangdong Province on the day his term expired, arguing that it was illegal to further hold him in custody. Authorities stated that the matter was internal, however, and that they need not provide any explanation.

Over the past decade, numerous Falun Gong practitioners have died due to abuse at the Guangdong Law Education Center, a euphemism for Guangdong Province’s largest, and perhaps deadliest, brainwashing facility. A 48-year-old entrepreneur, Ms. Wu Xuemei, is the latest known casualty. She died in March 2012, after four months of illegal detention there.

The Falun Dafa Information Center urges foreign diplomats stationed in China to demand the unconditional release of Mr. Zhu Yubiao and all Falun Gong practitioners held at the Guangdong Law Education Center. The Center encourages others to use the text provided by Frontline Defenders to write letters to the Chinese authorities calling for Zhu’s release.