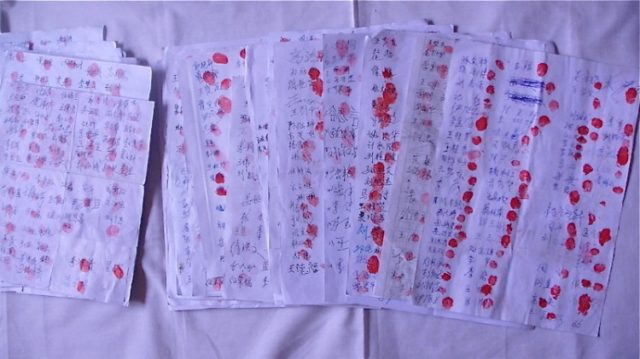 A petition signed and thumbprinted by 15,000 Chinese calls for justice over the death in custody of a Falun Gong practitioner (The Epoch Times)

NEW YORK — At least 15,000 people in northeast China have signed a petition voicing support for a young woman’s demand that Chinese authorities investigate the death of her father, a well-known Falun Gong practitioner. 47-year-old Mr. Qin Yueming (???) died in custody on February 26, 2011 at Jiamusi Prison in Heilongjiang Province. (news) Dark bruises covered his entire body and blood came from his mouth and nose when his body was turned over, indicating he had been tortured to death. (photos)

Mr. Qin’s daughter began collecting the signatures after authorities repeatedly rejected her and her family’s request for an investigation, and instead abducted her mother and younger sister. With the help of friends and relatives, she gathered the 15,000 signatures within a span of two weeks.

The petition, dated May 31, 2012, also calls for the release of her mother and sister, also Falun Gong practitioners, who are serving one and a half year forced labor terms. Among the signatures, at least one belongs to a guard working at the prison where Qin was killed. (news)

This is the third incident of ordinary Chinese citizens publicly demanding justice for a Falun Gong practitioner in the last two months.

In May, reports surfaced that a petition with 300 signatures and thumbprints had been circulated among top-level Communist Party officials, including Xi Jinping and Li Keqiang (who are expected to replace Hu Jintao and Wen Jiabao later this year). (news) The petition, one source revealed, had stirred fierce debate at the highest levels of the Party with some officials advocating a peaceful end to the Falun Gong persecution campaign waged by the regime since 1999.

Such grassroots actions are on the rise even though in some cases signatories have been persecuted themselves.

According to the Falun Gong website Minghui.org, the earliest known case of citizens signing a petition for Falun Gong occurred in February 2009 when 376 villagers expressed indignation over the death of a well-known practitioner in Liaoning Province. Typically citizens have signed their real names and put a thumbprint in red ink beside their signature, a practice that has historically been used in China to make legal documents official.

The Falun Dafa Information Center urges officials in Heilongjiang province with a sense of justice to heed the requests made in the petition, punish those responsible for Qin Yueming’s death and release his wife and daugher immediately. The Center also urges foreign media and diplomats in China to closely monitor and report on this case to help ensure the safety of these three courageous women.