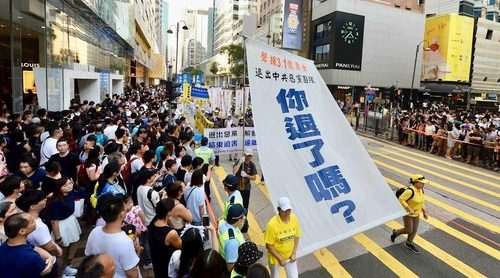 Editor’s Note: On May 28, China’s National People’s Congress passed a decision to impose new national security legislation on Hong Kong, a move that has been widely condemned. In order to better understand the impact that this legislation will have on religious freedom in Hong Kong, the Falun Dafa Information Center interviewed a volunteer from the local Falun Dafa Association, who wished to remain anonymous for security reasons.

Q: What has been the overall situation for Falun Gong in Hong Kong in recent years and how is it different from inside China?

After being physically beaten and falsely accused by CCP groups, which has happened from time to time in recent years, Falun Gong practitioners can appeal and most of the time, though not always, they can get a fair trial. None of the above is possible in mainland China.

Q: What do you anticipate the effect of the Beijing-imposed national security law to be on the local Falun Gong community if or when it comes into effect? Is the community worried about the law? What can the outside world do to help Falun Gong practitioners in Hong Kong?

A: The so-called National Security Law will obviously have a significant impact on Hong Kong’s freedom and the rule of law. If it is actually implemented, it will be the end of freedom of speech and freedom of belief in Hong Kong. Currently, the Hong Kong Falun Dafa Association is a legally registered organization in Hong Kong. However, in China, Falun Gong has been vilified by the Chinese Communist Party (CCP); Falun Gong practitioners have been arbitrarily arrested, tortured, and even killed for their organs. This persecution has reached a crazy level in mainland China. There is no rule of law at all over there.

Q: What have been the biggest challenges that the community of Falun Gong practitioners has faced in Hong Kong?

A: Falun Gong practitioners in Hong Kong have been consistently monitored and tracked by the CCP. Our applications to hold events in governmental venues have been repeatedly rejected for many years. Since 2013, all our public activities have received harassment and slander from CCP-controlled groups. Some Falun Gong practitioners’ street displays showing the persecution in China have been forcefully dismantled and confiscated by staff from Hong Kong’s Food and Environmental Hygiene Department despite generally following the government’s guidelines.

In 2016, our experience sharing conference was interrupted and forced to be canceled due to a bomb threat from a pro-CCP group. Several classical dance competitions organized by Hong Kong Falun Gong practitioners were also interfered by CCP groups and were forced to be canceled. Also, the Hong Kong Falun Dafa Association has never been able to host Shen Yun shows in Hong Kong despite trying numerous times, either because of the difficulties in booking venues or the Hong Kong government’s refusal to issue visas to Shen Yun’s key technical staff. Many Falun Gong practitioners from Taiwan and other countries were denied entry to Hong Kong by customs and border officials when they came to attend Falun Gong activities in Hong Kong.

A: The National Security Law will not only suppress religious groups in Hong Kong, but will also stifle academic institutions that carry out independent research, the financial industry and the business community that require unrestricted access to information, the legal profession which requires judicial independence, and the education system which encourages independent thinking. For the rest of the world, the CCP’s further export of its evil ideology is obviously another step to challenge universal values and poses a threat to all freedom-loving regions in the world.

We hope that all kind-hearted people around the world, including governmental bodies, will stand up to condemn the CCP and stop any form of cooperation with the CCP. This is the best way to help Hong Kong, help Falun Gong, and help all people withstand the threat of the CCP.

Hebei Man Dies Six Months after Arrest for His Faith