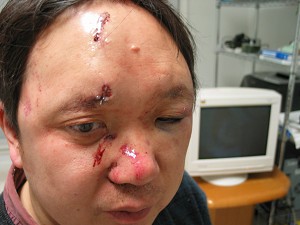 Dr. Peter Yuan Li hours after being beaten and bound in his Atlanta home by assailants who took only computers and documents, leaving other valuables untouched. Dr. Li says the assailants were agents of the Chinese Communist regime aiming to thwart his efforts to expose human rights violations in China.

NEW YORK (FDI) – The Falun Dafa Information Center has learned that Falun Gong practitioner Peter Yuan Li was assaulted and robbed by armed Asian men yesterday in his Atlanta home. Li is an information technology specialist who has been active in Falun Gong human rights advocacy over the past six years.

Around noon yesterday an Asian man, feigning a water delivery, appeared on Li’s doorstep. Before Li knew it, two men had forced their way in, pulled out a gun and knife, and wrapped him up in a blanket, attempting to suffocate him. They then used duct tape to cover his mouth, eyes, and ears, and an extension cord to tie up his arms and legs. The men beat him severely about the head and face, probably with the butt of the gun, Li said. He bled profusely. Moments later he heard one to two other men enter his home and one of them spoke Chinese (Mandarin). Half an hour later, they left. They had overturned his file cabinets and stolen two laptop computers and potentially other important documents, Li says, but no valuables. The wounds on Li’s face required 15 stitches.

“The incident was a deliberate attempt to undermine Li’s technical work against human rights violations in China and to intimidate him,” stated FDI spokesperson Gail Rachlin. A few years ago Li began working as a lead technical specialist with The Epoch Times, a newspaper known best for its highly critical Nine Commentaries on the Communist Party, which exposes the tyrannical reign of the Chinese Communist Party (CCP), including the violent suppression of the Falun Gong. Staff members of the paper speak of numerous attempts by the Chinese government to thwart their efforts. In a February 8 article The Epoch Times stated, “[The incident against Li] breaks new ground in the Chinese Communist regime’s campaign against The Epoch Times.”

Of today’s incident, Li noted, “They seemed to be a well-coordinated team” and were “clearly very familiar with tying people up, not like regular people.” “This [happened] because the Chinese communist regime wants to destroy my computers,” Li continued, “But they have gotten it wrong: My computers are highly encrypted. Nor will I be scared.” Li holds a Ph.D. in computer science from Princeton.

What happened to Peter Yuan Li is part of a larger pattern of violence perpetrated against Falun Gong activists by Chinese agents in the United States. Congress has recognized the problem and in 2003 passed House Congressional Resolution 304, stating, “over the past 5 years China’s diplomatic corps has been actively involved in harassing and persecuting Falun Gong practitioners in the United States.” In 2002, about 50 Falun Gong followers filed a lawsuit in the D.C. district court against two ministries of the People’s Republic of China government, alleging a systematic campaign of criminal activities designed to intimidate, harass, injure, limit, and terrorize U.S. citizens and residents who practice Falun Gong.

Despite Congress’ concerns, the incidents continue. “Congress has recognized the problem, law enforcement has recognized the problem, but what is being done? It’s time our government take concrete action to stop Chinese agents from running around this country and harming Falun Gong practitioners,” stated Gail Rachlin. “Thousands of us are having to look over our shoulders, lock our doors, and be wary of our surroundings at all times because agents of a foreign Communist regime may be lurking. This absolutely has to stop. We’re living in America, not communist China.”

The Falun Dafa Information Center calls upon U.S. law enforcement to investigate this matter. It is an assault on a U.S. resident by agents of the Chinese regime. The Center also calls upon the U.S. federal government to communicate to Chinese consular officials in clear and public terms that there will be zero tolerance for such illicit behavior here in the United States.