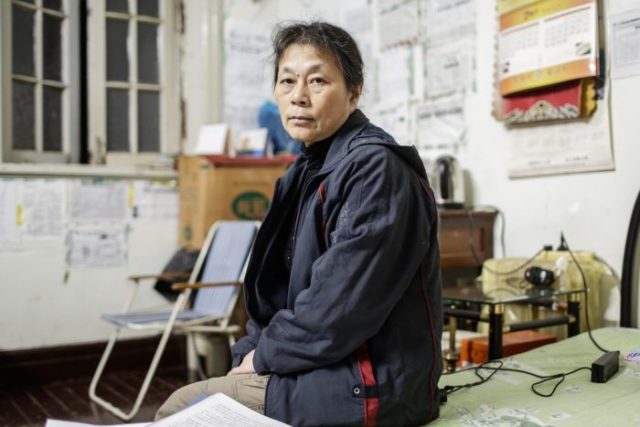 SHANGHAI — For the first few weeks, Shen Yongmei was told to sit on a rough plastic stool from 6 a.m. to 8 p.m., her back absolutely straight, her hands on her knees, and stare in silence at three sentences painted on a wall.

“What is this place? Why are you here? What attitude are you going to employ in order to comply with the police?” were the three questions the 55-year-old woman was told to contemplate. Any slackening of concentration invited a beating.

Then, her brain supposedly washed clean of disobedient thoughts, she was sent to work. For months, she screwed in the plastic plugs at the end of ballpoint pens, working with only brief food and bathroom breaks as she fulfilled her daily quota of 12,000 pens.

This was “reeducation through labor,” China’s way of reforming minor offenders — drug users and petty criminals — as well as government critics and people regarded by police as a nuisance.

Last month, China announced it would finally close the much-criticized program as part of a series of measures supposed to improve the rule of law. But former prisoners are giving the move a lukewarm welcome. They say dissidents still face the prospect of being locked away, often without trial, in facilities that are grim and abusive — even if they will no longer involve forced labor and attempted brainwashing.

Shen’s problems began when her house was demolished to make way for a luxury apartment complex in Shanghai in 2003. The former factory worker had been petitioning the government for years for what she considered adequate compensation. She said she was rewarded for her efforts by being locked up repeatedly and sent to unregistered detention centers — spending a total of 650 days in them over the past decade.

In 2012, after joining two demonstrations in support of people who had died in detention, she was sentenced without trial to nine months in a labor camp for disturbing the social order, according to documents she showed The Washington Post.

Shen was released in August, one month ahead of schedule, as the labor camp system was wound down in and around Shanghai ahead of the formal national announcement. But she said the abolition of the camps was just a “smoke screen,” a response to domestic and international pressure.

“The government gave no explanation as to why it is abolishing this system,” she said, speaking in her one-room apartment, with the television turned up loud so nosy neighbors could not listen in. “Was it a mistake? If it was a mistake, if it did lock people up wrongly, then shouldn’t the government come out and apologize? Shouldn’t they clear the name and records of those who were wrongfully sent there?”

That lack of acknowledgment, she said, shows that the government is not serious about becoming truly law-abiding. “Government officials will use other methods, including extrajudicial ones like black jails, to intimidate and punish those who go against their will,” she said.

Human Rights Watch says there were around 160,000 people in around 260 labor camps at the end of last year, although the number has been steadily dwindling ever since. Roughly half the prisoners were drug offenders, but the number also included burglars, pickpockets, sex workers, blackmailers and card tricksters, as well as an array of political prisoners: petitioners like Shen, people who criticized the government in public or online, members of underground Christian churches or banned spiritual movements such as the Falun Gong.

They worked in factories or mines, built roads or made bricks. At times such as Christmas or before major sporting events, labor camp workers would often do contract work for companies trying to fill a rush of orders. Inmates were often forced to make written confessions of their crimes and attend weekly political indoctrination sessions.

Conditions have improved since the dark days of Mao Zedong’s rule, when many people died of malnutrition and violence, but the system remains cruel and arbitrary, activists say.

Shen said that guards seldom beat the prisoners in her labor camp but that they would often instruct inmates to do so. She said she lost 20 pounds while inside because of poor nutrition and showed photographs of herself looking haggard and gaunt upon her release, with one eye bloodshot. Everyone in her work unit had blisters on their hands from working so intensely.

With the closure of the camps, many inmates may see only marginal improvements in their conditions. Drug addicts and dealers are likely to remain inside facilities officially reclassified as rehabilitation centers but in practice little different from the labor camps that have housed them, according to human rights groups. Petty criminals may be absorbed either into prisons or into a new community correction scheme. Political prisoners may simply end up back in the black jails that exist across the country, activists say.

Nevertheless, Nicholas Bequelin of Human Rights Watch said the abolition of the camps removed a black spot on China’s criminal justice system and ended a pernicious system that reached back to Mao’s time.

“The system was predicated on the totalitarian idea that it is possible and legitimate to brainwash people and to force them to change their political or religious beliefs through psychological pressure and manipulation,” he said. “It is a landmark decision to abolish it, but it still doesn’t address all the other failings of the criminal justice system. It doesn’t put an end to the persecution of government critics, and it doesn’t do much for drug offenders.”

Another former prisoner, Mao Hengfeng, 53, said she was sent to labor camps on three occasions during a lifetime of petitioning against the government. She said she also spent many years in black jails and two nightmarish spells in psychiatric hospitals, where she said she was drugged, given electric shock treatment, tied and hung upside down, and kicked in the head by medical staff members.

She said her campaigning began when her mother was denied proper compensation as a war widow. It intensified after her twin babies were killed — one aborted through an injection, the other drowned at birth — because she had defied China’s strict one-child policy, she said.

Mao, whose case has been documented by human rights groups, said she was thrown out of reeducation sessions in the labor camps she attended because she refused to admit her mistakes and would chant slogans against the government. She said she was once shackled to a bed for 16 days and often was kept in virtual solitary confinement.

Mao and Shen were both nervous about meeting in their homes, concerned that neighbors would report them to the authorities for talking to a foreign journalist. But both said they were determined to keep petitioning the government for a justice that has long proved elusive. Like Shen, Mao gave the abolition of the labor camps a muted welcome.

“I wouldn’t say it is progress,” she said. “But it is a change that is long overdue.”

Guo Chen contributed to this report.

Torture
After Losing Her Unborn Child, English Teacher Dies From Years of Persecution