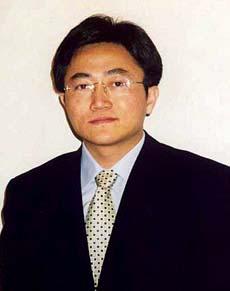 On a warm Spring day at their suburban New Jersey home, Dr. Charles Li and his wife Yeong-Ching Foo  playfully tell of the joys and trials of married life.  At first glance, they could be any other couple in America.  But their story is anything but ordinary.

For one, their engagement lasted over three years. It wasn’t, however,  a time of blissfully planning their life together.  Instead, it was three years spent separated by an ocean and barbed wire fences.

Charles Li was detained in a Chinese prison, where he was beaten, interrogated for days, deprived of sleep, subjected to a show trial, brainwashed in “reeducation classes,” ties to an iron bed, and had a hard plastic tube shoved up his nose, all in an effort to break his belief in Falun Gong.

She has been to Capitol Hill. She has been to Los Angeles, New York, Houston, Chicago, and points in between. She had her Congresswoman’s and the State Department’s phone numbers memorized from calling repeatedly, hoping she could find someone who would help Charles.

Although worlds apart, they shared courage, endurance, and hope during a dark time in both their lives.

Charles, a naturalized U.S. citizen from Menlo Park, California, traveled to China to expose the human rights violations committed against Falun Gong practitioners. However, he never made it far. He was arrested on January 22, 2003 as soon as he got off the airplane at the Guangzhou Airport in southern China. Through their network of spies in the United States, the Chinese authorities knew of his plans well before he arrived and were determined to stop him.

Yeong-Ching, 34, is a University of California Davis graduate who entered the software industry in the Silicon Valley. She met Charles, a graduate of University of Illinois who conducted research at Harvard, at a social gathering at Stanford University.

Yeong-Ching says that Charles went to China to defend the lives of others. “Charles had a very comfortable life, a good life, here in America. But he loves his fellow Chinese people so much, and he sees them suffer under this persecution,” she says.

A Falun Gong practitioner and member of Amnesty International Group 466, Charles had intended to assist in broadcasting evidence of the persecution of Falun Gong by overriding the signal of a state-controlled TV broadcast. Falun Gong practitioners in China have used this method since February 2002 to try to break through China’s pervasive information blockade. Yeong-Ching explains that the information blockade is a key weapon in the hands of Jiang’s regime–it has hidden the bloody persecution from the world outside China, and even from China’s own people.

Charles says that overriding China’s cable broadcast signals is justified and necessary given the state of emergency this persecution has created in China.

“The whole persecution is based on lies, so all of the people in China are affected,” says Yeong-Ching. She says by exposing the cover-up of the persecution, Charles sought to spare innocent people from being tortured to death. He also sought to give a chance to reconsider their actions to those who, misled by the propaganda, take part in persecuting their fellow countrymen. Perhaps if they knew the truth they would no longer commit these terrible crimes.

Charles must have known the risks involved in his efforts. At least five Chinese Falun Gong practitioners who successfully broadcasted evidence of the persecution in China have been tortured to death, while others have been sentenced to long periods in jail and have been subject to life-threatening torture.

“A lot of practitioners have been tortured to death, brainwashed, physically and mentally tortured,” says Yeong-Ching. Yet, Charles went to China knowing that whatever punishment he receives if caught will be less than what a Chinese citizen would have to suffer.

And while Charles did eventually walk away from his ordeal, his foreign citizenship didn’t spare him from abuse.

According to Charles, he was beaten upon arrest at the Guangzhou Airport, was interrogated and deprived of sleep for three days and nights, and was handcuffed and tied in agonizing positions for long periods of time. Between March 27 and April 2, 2003, he was handcuffed consecutively for 130 hours. In February, he was tied to the iron “death bed” for nine hours, with his four limbs painfully stretched out.

Most dangerous have been the several forced feedings that Charles was subjected to. Many practitioners have died from this form of torture. Those who have suffered it say it is excruciatingly painful. On one occasion the feeding tube inserted into Charles nose was left there for 39 straight hours, simply to increase his suffering.

During his detention, U.S. consular officials in Shanghai repeatedly protested against the abuses, yet the Chinese government has repeatedly denied all allegations of torture of Falun Gong practitioners, and has maintained that Charles was arrested simply based on criminal ?charges of what he “intended to do.”

Both Charles and Yeong-Ching believe, however, that the real reason they persecute him is because of his belief in Falun Gong.

Throughout his three-year term, Charles was forced into daily brainwashing sessions as authorities attempted to forcefully “transform” him and force him to renounce Falun Gong.

But their efforts failed, and Charles never succumb to the pressure during his prison sentence. Forbidden from reading Falun Gong’s moral texts, Charles says he managed to recall the entire principle book of Falun Gong – Zhuan Falun – by memory. In his long and dark days in prison, its teaching gave him hope and reason to go on. And although he was never allowed to speak to his fiancé in prison, he held out faith that she was working to free him.

News
1,184 Falun Gong Practitioners Targeted for Their Faith in August 2020

1,184 Falun Gong Practitioners Targeted for Their Faith in August 2020