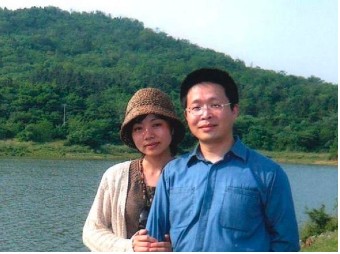 Mr. Jiang Feng and his wife. Jiang "disappeared" from Shanghai airport in mid-February

New York–As the World Expo in Shanghai entered its second week, Amnesty International issued an urgent action on May 10 calling for the release of a Falun Gong practitioner abducted from Shanghai’s International Airport in February whose precise whereabouts remain unknown.

“Falun Gong practitioner Jiang Feng went missing in Shanghai on 18 February and is believed to be detained by the Chinese authorities,” reads Amnesty International’s announcement. “He is at risk of torture and other ill-treatment.”

According to reports obtained by the Falun Dafa Information Center, Jiang is one of over 127 Falun Gong practitioners abducted in Shanghai since February 2009 in connection with the World Expo, which opened May 1. Like the Beijing Olympics in 2008, the Chinese Communist Party has used the event as a pretext to arbitrarily arrest, detain, and even torture Falun Gong adherents who refuse to recant their spiritual beliefs.

The Falun Dafa Information Center urges foreign media to investigate Mr. Jiang’s whereabouts and encourages individuals to write letters to the Chinese officials noted in the urgent action. The following are additional excerpts from Amnesty International’s appeal whose full text is available here.

“On 18 February, Jiang Feng went missing at Shanghai’s Pudong International Airport. He checked in for his flight to New York, but never boarded the flight. Airline staff said he was taken away by public security officials after passing through the security check point. The authorities have not told Jiang Feng’s family where he is held, and their efforts to obtain information from police in Shanghai about his whereabouts have failed. Friends in China believe he may have been taken to his home city of Hefei in Anhui province, hundreds of kilometres from Shanghai.

Jiang Feng had previously been imprisoned for three years from 1999 to 2002 for his Falun Gong spiritual practice. When he went missing, he was on his way to join his wife, Mei Xuan, a musician with the New York-based Shen Yun Performing Arts group. She fled to the United States in 2006, following her release from four years’ imprisonment in China for practising Falun Gong. Jiang Feng may have been detained in order to pressure her to cease her involvement with the Shen Yun Performing Arts group, as some of the group’s performances includes artistic representations of the persecution of the Falun Gong.”

For more information on Jiang’s case and the broader round-up of Falun Gong practitioners in Shanghai ahead of the Expo, see:

FDIC: Personal Stories Behind the Shanghai Expo Crackdown, May 7, 2010